There's a lot to tell you about, but I'm in a flurry-of-activity place right now, so I'm going to post a little bit and make promises that I will post more really soon. And then we'll just see how that goes. :)

I tagged a project for the Ravelympics, though I didn't join any teams or anything. It'll just be between me, myself, and my blog readers. So, about five of us. It's the Maui Shrug, and I started it during the Opening Ceremonies at my friend Rachel's house while drinking wine and eating cheese and grapes. She knows how to throw my kind of party, that Rachel. I'm using sport weight yarn instead of worsted, so I went up a hook size and the result is that the pattern has less definition than the example in the pattern and considerably more drape. It will be close-fitting, so I think it will work out fine. I've made some progress, but I'm going to have to crank it up if I want to get it finished and blocked (such that acrylic will, but it will a bit) before the Closing Ceremonies. Here's my progress so far: 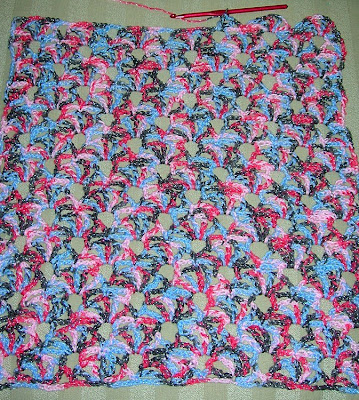 That's about 18 inches and it needs to be at least 42 inches. Here's a closeup of the stitch pattern: 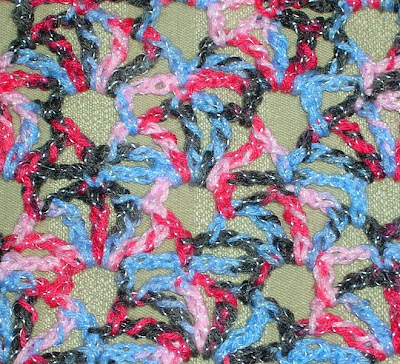 I would have more done if I could work on it while I actually watch the Olympics. Why can't I, you ask? Well, because I tried crocheting while riding the exercise bike, but it just doesn't work very well.

I don't have a TV in my cute little abode, so to watch the Games, barring a party at the home of someone with a TV, I have to watch in the exercise room of my building (or I could go to a bar, but then I'd have to buy something, and I've become such a miser lately). If I watch in the exercise room then, ostensibly, I have to exercise. Most especially if someone else is there. Often there isn't and I can take nice, long breaks. But during my 2 1/2 hours of watching last night, I rode for 1 1/2 hours total. And during my breaks I was all sweaty. So, no crocheting. But I'll get the shrug done -- I still have plenty of time to sit around on my backside and listen to All Things Considered. Never fear.

Along with my increase in bike riding, I've also started a new little fitness regime. Last week I started the One Hundred Pushups program, wherein one trains to do, oddly enough, one hundred pushups.

Yes, I know. One hundred pushups. Every time I say that in my head, it sounds like Dr. Evil saying "One million dollars". And it sounds like a ludicrous thing that I, the queen of sloth and no-upper-body-strength, could never ever do. I'm doing "girl", or knee pushups, obviously, and for my initial test I could only do three. Three. And they were some of the crappiest pushups you've ever seen, too.

So I'm a week and a half into it, and I'm happy to announce my humble little progress -- in my max-out for the last two days I've achieved seven very respectable-looking pushups. Yes, I'm pleased as punch with seven. It is, after all, a 133% improvement in a week's time. And they're no longer crappy! My high school gym teacher wouldn't even yell at me to keep my butt down!

It's a "six week" (LOL!!) program, but it will likely take me the rest of the year. But I don't mind. As long as I stay reasonably motivated, I think I can really do this. I'll keep you posted.

That's all for this morning, but watch for coming posts about the Wisconsin State Fair (including Elvis impersonators!!) and my dream about The Apocalypse! Yes, it's all excitement, all the time, here in Beer Town! Have a great day, and don't get too wild out there!

You go girl with the exercise!! 100 push-ups - WOW!! I applaud your efforts, and your plan sounds totally realistic. Also, it is so great you are already seeing progress. Perhaps I'll start a similar program with the abdominal exercises? (Well, who am I kidding -- I could use some work on push-ups, too. I might be able to do 3 girl push-ups, though I won't know until I try... 7? Now that would be really pushing it...)

When I got out of Navy bootcamp, I could do 100 pushups without even thinking about it. Now, I struggle to get through 10. Of course, I co knuckle pushups with one leg crossed over the other....But if I do girl push ups, I can do considerably more, though I haven't pushed myself to my limit.

LOL! Dr. Evil! Good luck with the push ups. It's an admirable pursuit. When I was still going to the gym, I was impessed with my 10 pushups. 100 would be amazing! You go!

Hi Sus! One of the five here, at last. Your pushup report had me laughing!

Sorry I've been absent. No telephone connection for 9 days (! - ah, British Telecom), then a week away, then setting up my broadband. Woohoo! So whizzy compared to the old dialup. How did I ever cope?? Hopefully it'll mean I'll have time to visit more often.