Not like OMG, I can't do this; it's waaaay too difficult, but it is very time consuming and there's a lot of trial and error and ripping out and starting over. And thinking you've finally got all the kinks worked out and then there's just this one thing that doesn't really become apparent until you're well into the project but it just will not do and so you have to rip it all out and start over again. That kind of hard.

And that's why designers of free crocheted purse patterns get paid the big bucks.

Actually, I kind of wish that I had documented that process so far so that I could show the pitfalls and all the thought and work that goes into one little purse. But, of course, in the heat of the moment things just got ripped and wound as fast as possible in order to get back to the creating. The camera was never thought of. (She says as if this process is all over now and everything is just going to fly right along. Truth is, there may be lots more opportunities!)

I do want to talk more about the specifics of the process, but I think I'll save that for when I can show you what I'm talking about. And until the prototype is finished, I'm being all very mysterious and secretive. 'Cause that's not annoying. Hee!

I will tell you that it's crocheted, it's a purse, it utilizes a novel stitch, and it's very colorful and cheery. And I can't wait to have it finished so I can show you!!

In the meantime, I do get to show you something else that's colorful and cheery -- the Patchwork Sampler afghan that I made for my dear friends Jane and Pat who got married last year. All those blocks went together fabulously and a little red border really brought it all together and I love, love, love it. So do they! 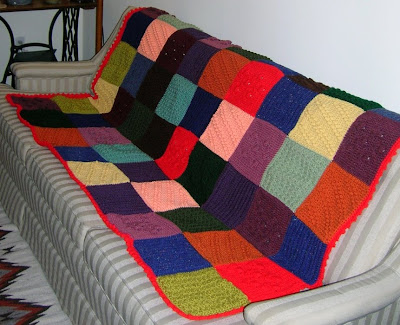 I love that it's nice and big -- I've been going through this serious phase where I'm annoyed that none of my own afghans are big enough. The one I'm making for us right now is going to be big enough that I will never have to chose between warm feet and warm neck again! But I digress! This is about Jane and Pat's afghan! That, once again, I have no really good photos of because of a serious case of Winter! So all the photos were taken indoors and the red looks weird and the stitches are kind of washed out. 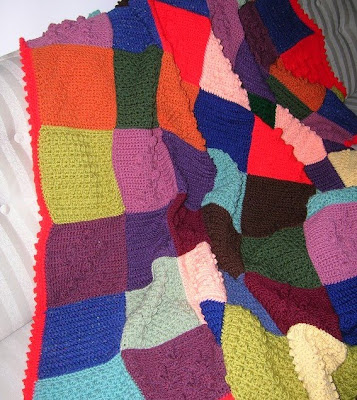 In real life it is Pretty! and BIG and cushy and waaaarm. All in all, a resounding success. And it is being well loved in Seattle. I cannot ask for more.

In closing, if there's one thing that is keeping me from getting the new purse design done as quickly as I would like, it is the wonderful Valentine's present that my sweet darling husband gave to me on Monday and is slowly taking over my life: 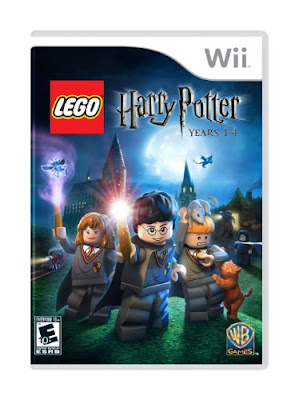 The hilarious thing is that I've not read any of the books nor have I seen any of the movies. So I only know about this franchise what one soaks up as part of pop culture. Granted, it's a Lego video game and it works pretty much exactly like Lego Batman, Lego Indiana Jones, and my favorite and the one that started my obsession with these games: Lego Star Wars. In fact, Gator realized that, in his mind, he'd been calling my new game "Lego Star Wars Harry Potter". Hee! I am having a blast with this one.

From all you have said I am curious to see the famous purse in all its glory!
The afghan is gorgeous!

Love the afghan, and the video game is to cool!

Designing is hard. I love making stuff up, but getting it written out in a way that someone else could understand is the hard part. I just kind of wing it.

Wow I can´t wait to see the purse one day. It really seams to be very hard work.

Your crochet blanket turned out very pretty and looks so cozy. I know red is nearly unable to get right on a photo. On mine it always looks kind of freaky orange.

It seems you are one of the very few people out there who hasn´t seen or read Harry Potter but finally he got you ;)

I wish you a nice Sunday and that you are finally getting warmed up and stop freezing.

People often ask me why I don't design. Because good design is hard, and I just want a good pattern to tell me what to do. I'm so grateful to those who love to design.

Love the afghan, color, design, size, everything about it.

Like above comments I can't wait to see the purse too.

I'm embarrassed that I am so far behind in my blog reading....but I can't resist telling you how AWESOME that afghan looks! It turned out so beautiful, colorful, no ends showing (can't believe you wove in so many ends! That is FORTITUDE!). Love it! Can't wait to continue reading the rest of your posts, to find out more about the mysterious crochet purse design.