She's done it again, but she has to stop (temporarily)!

The fabulous Gator and I are moving into a condo across town on July 22 and we have nothing yet packed. And I mean nothing. In fact, the house is in such disarray that the mere notion of straightening and cleaning before I can pack it makes my shudder uncontrollably. What have I been doing that the house has fallen down around me? Well, as you can see, I've been designing a little bit for the last month or so. But now that's coming to a temporary stopping point because... you guessed it: 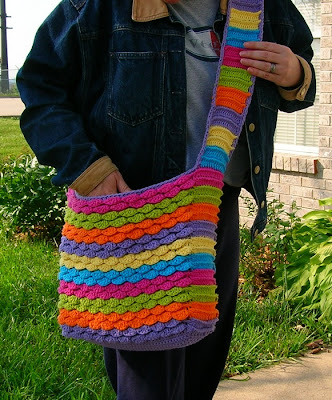 Pattern available in the sidebar!

Yes, this is it, the bag that started it all! And it's finally done, done, done! I love this bag with such wild abandon that I get giddy at the mere thought of leaving the house with it slung across my shoulder. This may be because I am a bona fide dork. But the bag is pretty awesome. :)

The construction of the Messenger Tote is a little more involved than the Backpack, but I hope the pattern directions are clear. I certainly spent a long time editing in an effort to make everything as clear as possible. My next project is to put together a photo tutorial of the general Spring Petals creation process. All that front-loop-only, free-back-loops rigamarole. I've had some really great questions from crocheters who are trying out the Backpack and the Dragon Egg that are going to be incredibly useful when putting together the tutorial. But, unfortunately, the tutorial will have to wait for a few weeks. Oh yes, all that packing and moving and unpacking. Yeah, that.

The funny thing is that we've lived in this condo before, when we lived with Gator's folks while we both went back to school at the same time (awesome idea, btw, everyone should try it! Um, yeah...). They've since bought another house and moved in, so we're going back and will have the condo all to ourselves. It's going to work out great all around, but moving is never, ever fun.

Darn it, now that I've written this post there's really nothing for me to do but start. I think I'll start in the yarn storage room, which is a complete disaster again... Hee!
_____
Posted by Sus at 11:57 AM

It's awesome, no wonder you're excited. I love the colors. Good luck with the cleaning and the packing. But, maybe you can short circuit it and do both at the same time? Start packing. As you put things in boxes, the cleaning portion is getting done, cause things are out in the way lying around. As you go whatever you don't want to pack, throw away. Then all you need to do at the end is vaccum. Don't forget to label your boxes so you can find things at the other end. Label with the room the box should go in and it's contents.

i love your bag pattern very much !!!
I have to find some yarn that match and than i start with the "Dragon Egg"
Sorry, my english is not that good ( but good enough to understand english pattern )
I send you greetings from germany
Hanni

Popping in to say hi, hope you're having a good wkend.

Love your stuff! Cute and colorful. Hope all goes well with the unpacking.

That bag is tooooo fantastic! Packing can wait. . .

Best wishes with your move! I used to do it all the time, but I'd have to start cleaning/purging now just to even *consider* moving in the next decade...

Your bag turned out so fun! Looks really great and functional! (It turns out that us PT's are all about the "functional.")

And, I like your pattern sidebar which includes pictures of the finished objects!

There, now I'm all caught up with your life :-) I'll be watching to see how your move turns out :-) whenever you re-surface, that is...

This is fantastic! I linked to you this morning on my blog:
http://www.mooglyblog.com/10-free-crochet-tote-bag-patterns/

Thanks for sharing your pattern!

could a link to the pattern be posted please. i am not getting a pattern for this. Thank you!! :)