The Doctor is in.

This was a Christmas gift I made for my husband's niece, a Whovian of massive proportions. Meet the Eleventh Doctor, complete with fez (Fezzes are cool!) and his most constant companion, the TARDIS. This was Utilitarian crochet at its finest and they were a blast to make. I used patterns exclusively, but did have to spend a little time making revisions to get the coat to fit the doll properly. Other than that, you reads the pattern, you gets the Doctor. Nice. Oh, the hair was a little different. But the instructions are actually quite good and if you just do what they say, you will get good hair. Peasy! 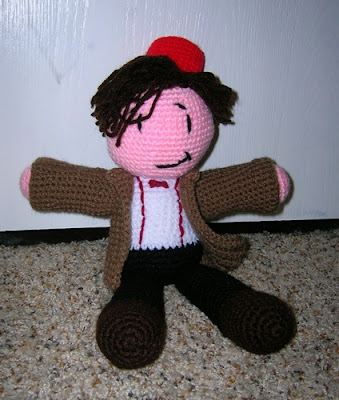 The TARDIS was ultimately just a box, but it really benefitted from plastic canvas reinforcement to keep the edges sharp when stuffed. I cut four pieces, tacked them together at the corners so they wouldn't bulge, then affixed them to the top of the sides before I attached the roof. The roof was a simple square, which naturally peaked (with a little tug of the top "light") once the stuffing was complete. 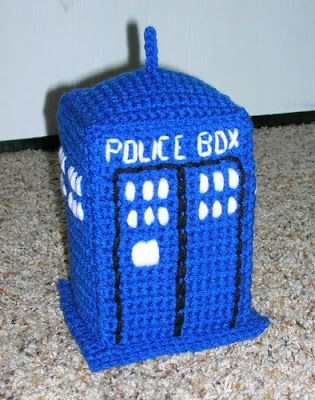 We were out of town at my sister's on Christmas Day and didn't get to see our niece open it. A phone call and her post about it to Facebook were all the evidence we needed to know that it was a huge hit and that I apparently still have the fangirl touch. :)

And speaking of being a fangirl, she inspired me to give Doctor Who a try last fall and I have totally succumbed. I've watched all of the "new" Who (2005 - present) via Netflix and Amazon streaming at least twice per episode and some of them I think I've seen four or five times. Such good handwork watching. And I don't have any indication yet that The X-files are getting jealous.

Yes, it's a sickness.

The TARDIS is so fun and easy to make -- I will have to make one for myself, too. We will have an army of TARDISes! :)

I'm sure I don't understand the whole Dr. Who thing, but your utilitarian crocheting paid off and what a fun result!