Things have been busy here in Beer Town. I've been reorganizing the lab since late summer in between running experiments and TAing cell biology. But, never fear, I found plenty of time to play and frolic in the waning late-summer days!

I walk a lot here in the city, but a couple of weeks ago was the first time I walked in an organized fashion -- my first 5K! Al's Run is a major event up here -- there were over 15,000 people running, walking, and racing wheelchairs this year. It was a beautiful day for a 5K, but for a walk, it wasn't much of a challenge. Not only is it not very far, but there were so many people, strollers, wagons, etc. that I never got beyond what I would call a leisurely pace. It was a little frustrating, frankly. But I was walking with friends and once I was able to let go of my frustrations, I had a great time. The shirts were cute, too: 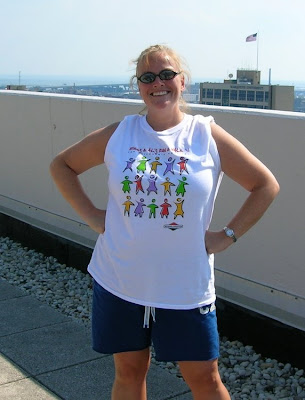 You can see that I was proud of the fact that I'd become a number: 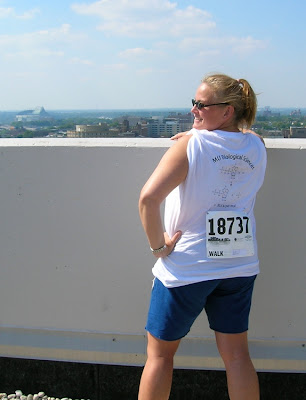 Yes, that's the reaction for the hydrolysis of ATP on the back of my shirt. The Biological Sciences department had a team. That was our artwork. We are complete dorks.

More fun was had last Friday night when several of my classmates went to Caffrey's a local pub for happy hour. We weren't very good at darts, but we had a lot of fun trying. Here, my friends Xi, Priyanka, Radhika, and Mae give it a go: 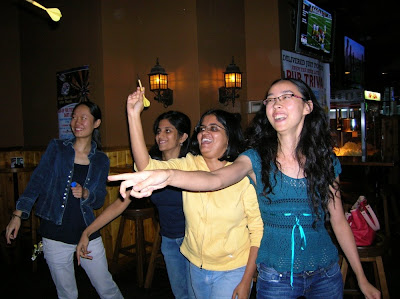 And while I do truly, truly suck at darts, it turns out I'm not half bad at bar shuffleboard. Who knew? I think I'll be playing that more often!

Last night I went to the rally to send off the Brewers to their first playoff series against the Phillies (sorry, Mr. Yarnthrower, but I really hope your boys lose!!). The turnout was enormous and I couldn't see a thing. I could barely hear a thing, either, but it was fun to be there nonetheless. Also, I have no pictures, but they would have just been of the backs of the heads of the 14,000 people standing in front of me, so just close your eyes and picture that for a moment. Wow, it's like you were there!!! We didn't hang around for the party after the players left the stage, so as we were walking back to the bus stop, we were pleased and surprised to see the players buses come to a stoplight right beside us! We waved, they waved -- it was the best part of the afternoon! Turns out I'm a science dork and a sports dork!! Tomorrow I'm watching the first playoff game with my friend Anne, even though I kinda have to sneak out of work to manage it (it's an afternoon game). It will be worth it! Plus, I figure, watched cells never mate, so I'm really helping my experiment by leaving and ignoring them! It's actually a scientific strategy! I'm a genius! Just give me my degree now, please!

Well, since that's probably not going to happen, I'll just plug along in the lab and spend most of my evenings doing handwork. The last couple of nights it's been the Seraphina shawl. I love this pattern, but I wish I had softer yarn to work with. This is one of those times in life when one cannot justify yarn expenditures when there are four Rubbermaid totes of yarn in the front closet and one's stipend just went down. So, it's stash acrylic and it's a little stiff. It's a very pretty color, though -- TLC Heathers in Blue Moon -- and much prettier in person than in the pic. I think the weight of the finished product will help with the drape. 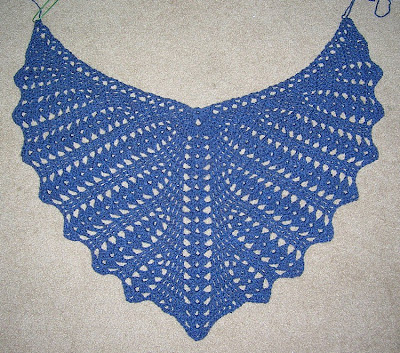 So that's what's been keeping me so busy. Which is good, because moss is so hard to get out from between my toes.

OH....Now I am so bummed I didn't do Al's run! My sister and I have been talking about it for months, though in the weeks preceding the race, her ulcerative colitis started acting up again, and she figured it would be best if she didn't participate in anything in which she wasn't certain about where the bathrooms were. I'm sure I would have found you amid the 15,000 people there! Of course, my shirt wouldn't have been nearly as cool as yours -- love the ATP hydrolysis thing...and actually understood it about a year and a half ago (though now it's all lost).

So awesome you could go to the Brewers rally. Possibly a once in a lifetime opportunity! (Or, maybe just a once in 26 years opportunity...) What fun!

Have a great day!

That is a pretty shawl. Hopefully, the yarn will soften in the wash!

You've been having a lot of fun up there! Me and my no-life self haven't been doing anything.

Gorgeous shawl! I'm a science dork too and proud of it!

Look at you in your walking duds. That's cool!

Love your seraphina! I just finished one of those too!!

Lovely start to the shawl! I must make one of those someday! And remember, dorky is in the eye of the beholder, Wear your walking shirt proudly!

Love the dart just sailing out of shot! And your Seraphina is excellent. Hopefully the yarn will soften a bit with washing. Isn't it just a lovely pattern to work?