At least today's word is scientific...

A week ago Saturday we had an Anti-Bachelorette Party for my friend Anne who is getting married on Nov. 1. It was an "Anti-Bachelorette" party because, for some outlandish reason, Anne is not into barhopping while wearing a tiara made from replicas of male anatomy. Go figure, right?

So we congregated at Veronica's apartment, provided Anne with mimosas on-demand, played games, and watched The Wedding Singer. We did give her a bridal tiara and a magic wand, but we did not require her to wear them in public (nor were there any body parts of any kind represented therein).

Anne loves the game Apples To Apples, so we made a custom version of the game that contained words pertaining to her and her fiance, along with some standard wedding terms. It was a big hit.

Anne did not wear her tiara for the requisite smooshy-face pictures. Darn her. 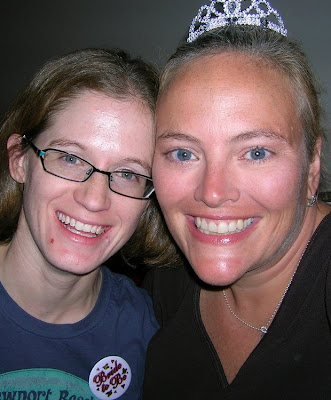 An important thing I learned was that, with my hair pulled back and a sparkly tiara perched high atop my head, I look frighteningly like Toni Colette as she walks down the isle in Muriel's Wedding. Of course, my forehead (fivehead!) is even bigger...::shudder:: 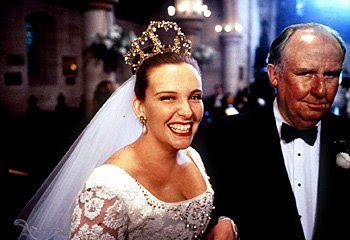 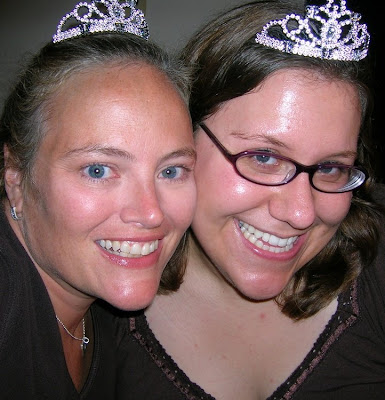 And we learned that Rachel's hair was not meant to hold such an insubstantial trifle of a tiara. She requires a full-on crown. Pity we didn't have one. 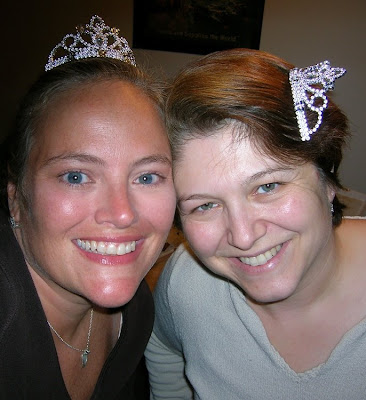 We ate, we drank, we made merry, we sang along to 80's music, and a grand time was had by all. You simply don't need a giant inflatable penis for that.

'Five Head' Snort!
Hey! I'm friends with the guy that created Apples to Apples! He lives here in Madison and he and his wife just had a baby girl!

I get to wear my tiara next Friday. It's part of my Halloween costume. [Looking around to make sure we're not overheard] Don't tell anyone 'cause it's still a secret, but I'm wearing my tiara and hanging a specimen cup with some apple juice around my neck. I'll be Princess and the Pee!

I've never heard of the game Apples to Apples. I'll have to look in to it.

I have heard of inflationary language though!