Just as I was sitting down to write this, I heard something that sounded like an oddly percussive motorscooter or something. I wasn't really paying attention. Then I heard it again and thought, "no, that sounds like a snare drum. Why would I be hearing a snare drum?" I live on the fourteenth floor* of an apartment building in downtown Milwaukee. This drumming seemed very odd. But I looked out my window and, sure enough, on the sidewalk across the street was a dude standing there playing a snare drum. Not like he got lost from his pep band or anything, but standing straight, playing his drum on a stand, while a girl stood facing him holding some sheet music. Two other girls stood off to the side as if in rapt attention. I watched as he played for a bit, then he finished. The girls clapped and jumped up and down, the guy picked up his drum, plopped it in a case, turned to the car parked right beside where they were standing, put the drum in, got in himself, and took off.

But then again, my friends and I once re-enacted the entire mad tea party from Alice in Wonderland in the middle of a Perkins restaurant. So it's not like I can talk.

But this isn't really what I wanted to talk about. I wanted to tell you about the awesome time I had last Saturday night once I'd recovered just a bit from my Very Long Experiment. As you may or may not know, Tuesday was the start of Diwali, the Indian Festival of Lights. The Indian Student Association is very active on the Marquette campus and they have quite a festival to mark the event. As some of my grad school compadres are from India, I accompanied them and had a terrific time!

First there was dinner: 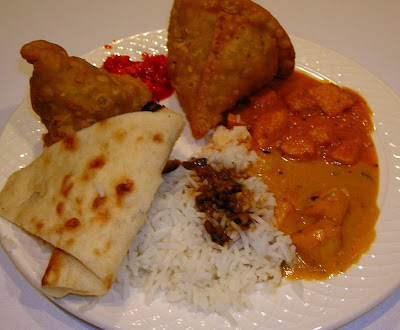 I'm not a huge fan of Indian food, but I do love to try new things. Mostly I like hearing my Indian friends talk about the dishes I'm eating and telling me how they're made and stories about food and their families and their way of life. I guess I like the culture of food more than I like most food. But not always -- those big fried things are my favorite -- they're called samosas. They are pastries filled with potatoes, onions and peas spiced up just a bit and deep fried. Heck, it's practically Wisconsin food!

I got some of the required smooshy-face pictures. First, Radhika and me... 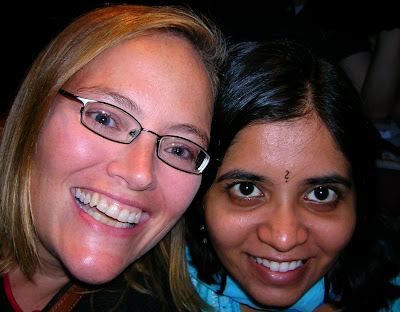 ...and then Priyanka and me! 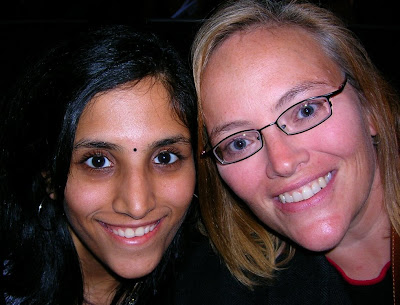 After dinner was a big dance program, which I couldn't get pictures of because my camera doesn't like to do that. It's very persnickity, that camera. The dances were wonderful!! Afterwards, I got a photo of a couple more of my friends that danced in the Bhangra -- they were amazing! Here's Anjali, their friend whom I don't know, and Jasvinder all decked out! 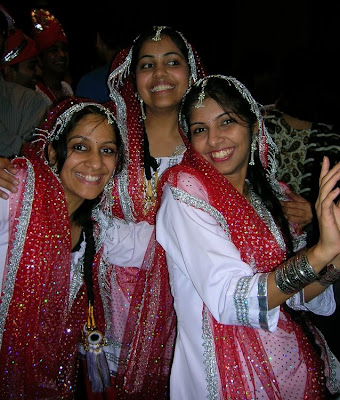 It was a great time and I'm glad I went, even if I should have been catching up on my sleep. It's been a crazy busy week and I'm still not caught up. So I think I'll just go to bed right now.

As long as there is no more random drumming outside my window.

No thirteenth floor? I though they'd gotten over that.