In keeping with the number titles, I give you the number of years I have been married as of today. Happy Anniversary to my Sweetie! It sucks being apart on special days like this (who am I kidding, it sucks to be apart every day!), but we are taking heart in the fact that this is the last time. I will be done with school this July and we will be together again, no matter where we end up. Anywhere. Just together. I'm psyched.

So, as a good wife, I finished Gator's anniversary socks and got them mailed off earlier this week. I'll save the picture of the FO for when he has received them. He knows they're socks, he knows they're blue and striped, he saw a pic of their beginnings earlier, but I want to save the final pic for after he's opened his present. :)

Finishing the socks left me with no knitting on the needles. (Yes, Sis, the tablecloth languishes. It's a problem. It's also crochet, not knitting, so my earlier statement is correct. ::grin::) I have going-away presents lined up for some of my professors and friends, so I leaped into a project that allows me to finally use some yummy clearance yarn I've been stroking longingly for over a year since I bought it. It's viscose, linen, and silk and it feels very posh. It's a little nubby, but still totally delicious. I'm using the Breast Cancer Awareness scarf pattern, but I admit it's just because I think it's pretty and not because I am trying to crusade with it. Not that I wouldn't do that, it's just not my goal with this particular item. So far, I am very pleased with the results. 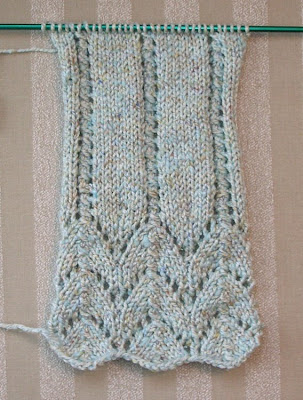 I modded it a bit by leaving off the bobbles (not really a fan) and adding a repeat of the first part of the chart, which I think really adds something. I like.

So now I'm off for another day of discovery (or something) and preparations for another long weekend of staying up all night with my cells. The fun never stops around here.

But thinking about how lucky I am to have the most awesome, supportive, and interesting husband in the world sure helps.

Email ThisBlogThis!Share to TwitterShare to FacebookShare to Pinterest
Labels: knitting, my hubby rocks

Congrats to you and Gator on your anniversary!! The thought of me having to be without you Milwaukee in the not-so-distant future makes me sad, ;o) but I'm excited that you guys will get to be together.

The scarf looks good! I like the pattern at the end.

Happy Anniversary to you and Gator! I'm so happy for you that you two can be together soon. I hope it doesn't mean you will stop blogging, though. Too many of us out here in cyberland will miss you.

Happy Anniversary to you and Gator! The scarf is really pretty!

Happy Anniversary! WOW -- I bet it feels great to know you'll be done in July! (If you leave Milwaukee in the middle of summer, perhaps you'll *forget* about the kinds of winters we have here, and the -10F temps we started the morning with today...)

You always find the best ever free patterns! Love the scarf, and the modifications -- me also being not much of a bobble fan...

Good luck on your lab projects!

Happy Anniversary! Gee, for some reason, I thought you two were newlyweds. Well, here's to many more! And, lovely scarf!

happy Anniversary! and the modified scarf is gorgeous (I don't like bobbles muc, either).