It's Epiphany, which means the tree should come down tomorrow. :( It's not that I'm so sad for Christmas to end, it's just that I really really like the fairy lights in the dark evenings. Maybe I should just string some up for the rest of winter. I should be able to find some super cheap. (The tree is pre-lit, so it's not like I can just [easily] take the lights off the tree and string them up alone.)

It's been a fun twelve days, though, full of get-togethers and much food and drink -- all of which I have no pictures of because I SUCK, but rest assured a marvelous time was had by all. :)

Now that the holiday is over, though, I can show you the gifts I made for Gator and his mom. Teena got the waterlilies drop-stitch scarf, which I think turned out lovely. She says it will match her new coat quite well. 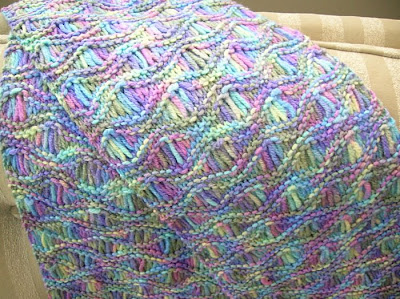 Gator's present this year was pure fun. I've made him hats and a scarf and socks and I was running out of ideas of things to make for him that he'd actually appreciate. It came up during a phone call that he would like a stuffed animal ('cause he's totally secure in his masculinity and super cool like that), so I tried to find something that was big enough to be cuddly. I found the Animal Pillows pattern on Ravelry, modified the nose so that it's more of a muzzle, and totally winged it for the eyes (the googly eyes alone were much too small!). It's purple because that's his favorite. I call him Pudgy, but he calls him something else that I can never remember. I think he's pretty awesome and good for hugging, though. 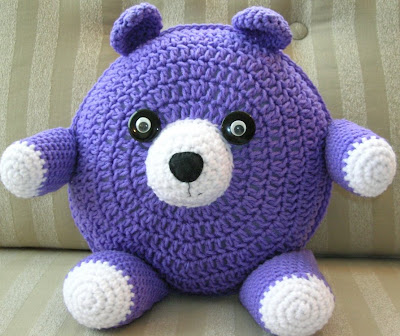 Animal Pillow by Jennifer Down Under
Red Heart Super Saver solids in lavender
Hook size US I (5.5mm)

As for me, I got some really cool and awesome gifts this year, but the one I want to really show off, the one that makes me go "Squee!!", is my new microwave!!! It's full-sized but not too big, and has a moisture sensor so it will automatically determine how long something needs to cook based on its steam production! Science!!! It works really well and it's pretty, to boot! 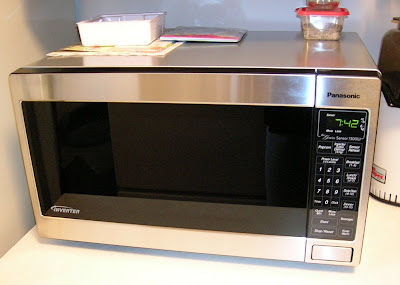 This is what it looks like inside (this picture is mostly for Gator, who hasn't seen it yet -- sorry it's so boring, but be glad I didn't take close-ups of all the buttons and stuff): 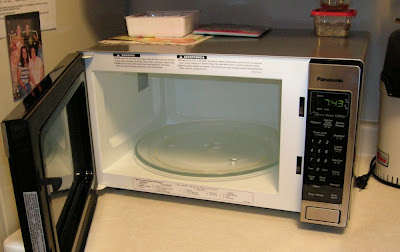 While I was at the store picking out my wonderful new microwave, I also hit the 75% off Christmas decorations aisle. I controlled myself pretty well, I think: 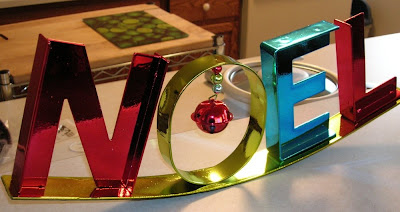 This is all-metal and is pretty heavy. It's bright-colored and super cute. A fun addition for $3.75! Bargain! 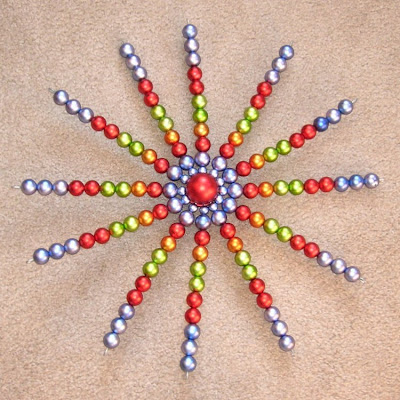 This one, I admit, I have no idea what I'm going to do with. But I think it's incredibly neat-o. It has an eye at the end of each ray, so I can hang it quite easily, but it's pretty big and I'm not sure where a good place would be. Since we'll be living someplace new next Christmas, I'll worry about it then. In the meantime, it's quite festive on my floor.

I've also been working steadily on my latest Seraphina shawl and Gator's new socks, but photos of them will have to wait until next time. Oooh! Anticipation!

I've also been having non-stop lab frustrations, and I had better go face some of those right now. Thanks for attending my Christmas show-and-tell! Have a great one!

The scarf is beautiful and the stuffed animal is too cute! Congrats on the new nuker, too.

Your scarf is very fabulous!! You always find the neatest ever patterns...

Sorry things in lab are frustrating right now. I think it means that you're about to discover something really big. I'm completely confident you will!

The scarf is beautiful and the stuffed animal is so cute! Great work. I'm sorry life in the lab is so frustrating!

Things at work for me, have settled down now. The new person is trained and functioning on her own, so I don't have to be at work as much. I fill in for vacations, sick days, and when people quit. Fortunately, people don't quit all that often. I have to work this afternoon, because someone has to go to the dentist.

I love the Christmas things you bought! They are bright and colorful, something sure lacking in all our gray WI days.

The microwave is very sharp-looking. Mine has the steam-sensor thing, too. On my newish microwave, though, they made the buttons smaller and my middle-age eyes have a harder time seeing the words.

My brother hung some of those icicle lights over his curtain rod in the living room and it's a nice effect all year long.

Neat stuff you got there! Love the scarf.