Many have asked: The origin of Asparagus & Mayonnaise

When you're young(er) and you leave home and go out into the world, you often are confronted with the idea that your "normal" is not normal to others.  I'm not talking about the big things like politics and religion and overall world-view; I'm talking about the little things.  Like when I found out that some people won't eat any brand other than Peter Pan peanut butter, or who think nothing of making Campbell's tomato soup by adding water to it instead of milk (honestly, that one still makes the hairs stand up on the back of my neck.  Sorry if I offend).  Or those turns of phase that people from other places or other families have that make you cock your head and think, "Huh.  I see what you did there, but I've never heard that in my life.  Where did that come from?".

I started dating my now husband when I was 20, so I still had a lot of "normal" things to be confronted with.  He liked to point out my "non-normal" things rather relentlessly (but, like, totally lovingly.  Hi, Sweetie!)  Like the term "piecing" for snacking ("I'm not too hungry for supper; I've pieced all afternoon").  Or keeping the potato chips in the oven (where else would you keep them???).  Or the very existence of an actual, distinct "wh" sound (Oh, do not get me started...).

Food is often a great player in the battle of "my normal vs. your normal".  To this day, Gator refuses to admit that grits are actually food.  He calls them a by-product in the processing of feed-corn (He likes to think that being from Iowa makes him a great expert in corn.  Yeah, like being from Missouri makes me some great expert in crystal meth, or something, but I digress).  But the one thing that made his eyes bug out, his mouth drop open, and then made him never shut up about it for, like, days was the way I eat, courtesy of my sweet, ever-lovin' Papa, canned asparagus.

Now, I never claimed this was healthy.  I simply claimed that, if I were to eat canned asparagus, this is the way it has always and will always happen.  The end.

Gator was/is horrified.  In fact, when he once took a creative writing class that focused on children's literature, he wrote a story based on the topic of his culinary nightmares.  And now I offer this story to you in its entirety, since every children's publisher he sent it to in 1997 rejected it.  Big ol' dummies.  Oh, well.  Your gain, I suppose.

Once there was a kingdom where people and chickens lived happily together.  The chickens could laugh and talk and even dance.  Every week the people and the chickens had a big party and everyone was invited.

King Cluck, the King of the chickens, always came to the parties.  He was a big white rooster and he always wore a red vest with shiny brass buttons.  On his head he wore a golden crown with a picture of himself on top.

King Cluck liked the parties because everyone blew the kazoo.  He especially liked the kazoo the he blew because it had a picture of him right on it.

He also liked the pretty balloons that went pop when he pecked them and the bubbly punch that made him sneeze like an old buffalo.  Kerchew!

But most of all, King Cluck liked asparagus.  Yes, asparagus.  He thought it was wonderful stuff and he ate it all the time.

"What was that noise?" thought King Cluck.

He turned around and saw little Suzy Fopinpop eating the biggest, juiciest piece of asparagus he had ever seen.

"Little Suzy, can I have some of your asparagus?" asked Cluck.  "I will make you a chicken princess!"

"Yes," said little Suzy, "you can have some of my asparagus."

King Cluck bowed to the little girl and then he took as very big bite of asparagus.  At first he smiled but then he turned green.

Little Suzy Fopinpop laughed at the big chicken hopping around in front of her.  "My mother was right!" she giggled.  "I am the only one who likes mayonnaise on my asparagus!"

When I started this blog and was trying to come up with a name, this story was stuck in my head.  Granted, I am a Miracle Whip over mayonnaise kind of girl, but that just didn't have the same pizzazz.  And so, forever after, my online presence will be dominated by my (by Gator's standards) most non-normal bit of normalcy.  And the inexplicable sound of kazoos.
Posted by Sus at 7:04 PM 7 comments:

I have unofficially (heck, it’s my house – make it official! Yell it from the rooftops! I can change my mind later if I want!) declared this year the year of COLOR!

Our split-level condo has lots of plusses, but an overabundance of natural light is not one of them. Pair this with generally neutral furnishings and my long-standing love of navy blue, and things can get pretty drab pretty fast.

So I’m punching it up! Adding some pizzazz up in here! Gettin’ jiggy wit’ it! Or other phrases I sound just as ridiculous saying. Trust me. Or, in more knit-friendly slang: I’m busting some stash and brightening things up with some cool retro motifs!

I started small with a tissue box cozy adapted from that most beloved retro motif – the Granny square. So quick, so easy and so addictive that I made two in just a couple of hours. My only complaint is that I can see through to the tissue box a little too readily, but read on for my future plans to fix this… 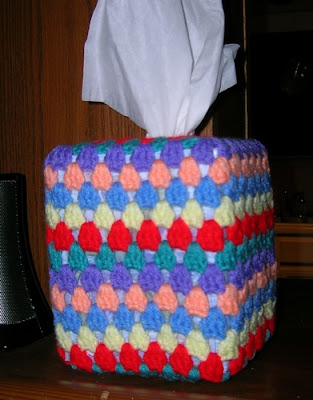 Then I moved on to throw pillows. A little grouping of cheerful pillows on a neutral sofa can really punch up the color level in a room quite quickly! 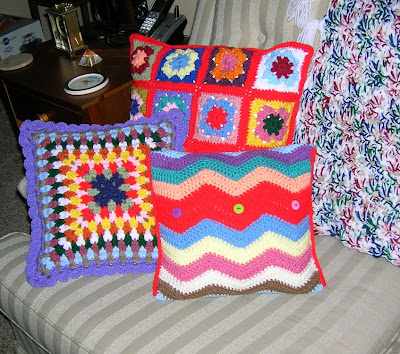 I purchased a nice, large, soft form for the largest pillow since my existing throw pillows were quite small. 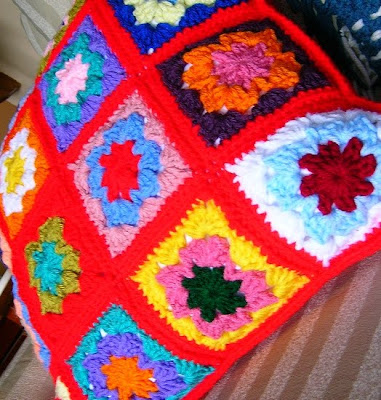 The smaller pillows were navy blue but now they're much more eye-catching! Granny squares are quite a "holey" and I was afraid the old pillow would show through too much. So I went with the Spiky Granny Square motif that fills in the holes quite a bit more. The center part of the square still has the traditional holes, so I made the center navy to lessen the contrast as much as possible. 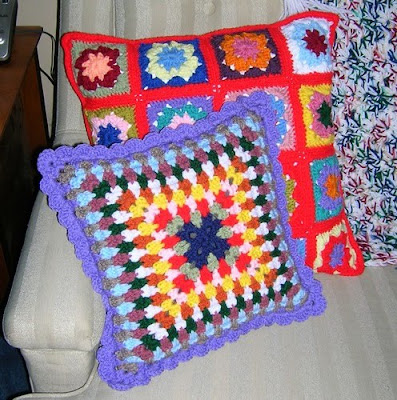 The Spikey Granny Square will also be adapted for future tissue box cover projects to keep the cardboard from showing through. I'll keep you updated on how it works!

The backs were a lighter shade so I varied the colorway on the back of the pillow and made the center lighter. Plus I have a slightly different look by simply flipping the pillow over! 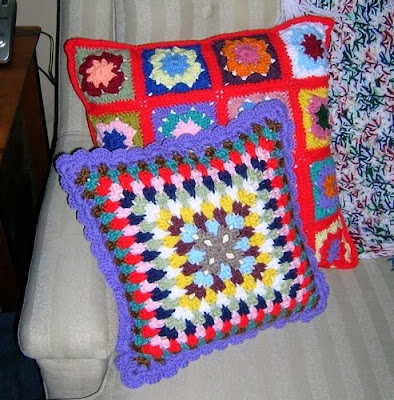 The ripple pattern covers the old pillow completely, so I didn't have to worry about any show-through. I made this in an envelope style, slipped the pillow in, and buttoned it up with some plain but awesomely bright buttons. 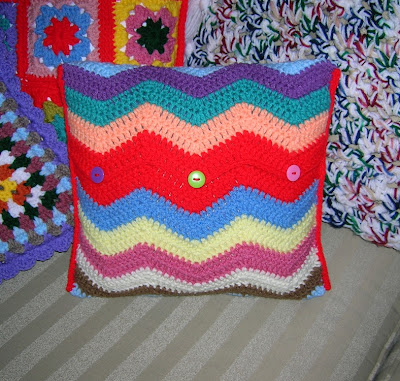 The ripple goes all the way around the pillow, so I can flip this one over to change up the look as well! 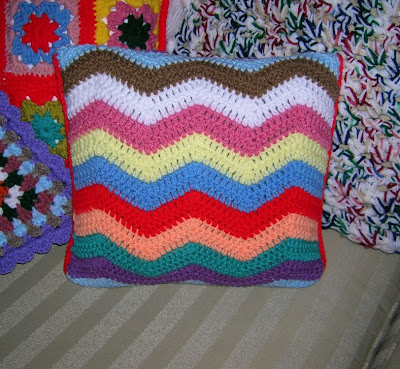 I smile every time I see these splashes of color in my living room!

Next on the color front are some antimacassars made using the African Flower motif. But these are kind of on the back burner because I've just cast on my fifth shawl of the year.

Oh yeah, that's right -- this is also apparently officially the year of SHAWLS...