Since I've moved back to Columbia, I've spent very little time with my friends here. Partly it's because I just kind of holed up with Gator for awhile when I first got here. Conflicting schedules are to blame in some cases. But, really, a lot of it has to do with the fact that I just kind of drifted out of contact with a lot of folks over the last three years. They got new routines with other people, got into new relationships, moved, had kids, etc. And now that I'm back, I'm just not a normal part of their lives anymore and it's hard to find time to smush one more thing into a busy life. I get it. I don't take it personally. Technically, anyway. I know I'm as much to blame for the drifting as anyone. I went off and had an adventure. I made new friends. Just because I decided to pop back into town is no reason for anyone to drop everything and accommodate me. But, even though Gator is awesome and my very best friend and I like him better than anyone on the planet, he's... Well, he's a delightful homebody. And a tiny bit antisocial. (Those that know him can stop chuckling now. I know. I understate.) I like to gad about! I like to do fun things with all manner of fun people! I like adventures! I'd like to have adventures here in College Town and then maybe, maybe, I can learn to love it more and not pine endlessly for Beer Town. And as much as I love being with Gator, not having girlfriends to gad about with makes me lonely.

So I became determined to hook up with my old friends, even if I had to become a nuisance. The other problem is, I lost my old address book with everyone's phone numbers in it. If their number wasn't programmed into my landline phone (and it only held 10 numbers, so those were mostly family and almost none of my friends were in it), I didn't have their number anymore. I didn't have a cell phone before I moved to Milwaukee. Yes, I know. I wish I still didn't have one, ridiculous things, but that's another post, I reckon. ANYWAY, I had to pester my friend Amy via Facebook for weeks and finally we managed to exchange digits (I know, it shouldn't be so hard but somehow it was!) and set a day and time to get together!

Last night we went to Murry's, an awesome little restaurant here in College Town that I had not been to in almost four years. It's exactly the same as it was, which is kind of comforting. We had one of their most famous menu items: Green pepper rings. They are like onion rings, but green peppers. And they're covered with powdered sugar. Yes, you read that right. Powdered sugar. Oh, I know what it sounds like. It sounds horrible. It sounds like the worst idea ever. But. They. Are. AWESOME. There's some sort of magic that happens when the ingredients touch each other and they are transformed. It is a delicious example of something being far greater than the sum of its parts. I should have taken a picture of the dish itself but I did not because I was too busy eating it. But I did take a smooshy face picture of me and my AmyAmy (that's what I call her): 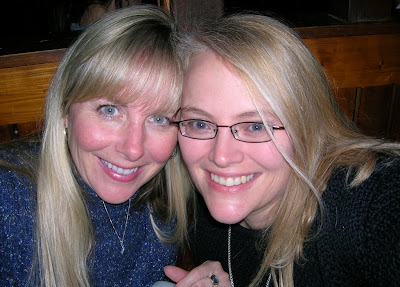 So the College Town adventure has begun! Next I'm going to pester my friend Sarah, again via Facebook, into seeing me! I'm gonna get all re-friended up in no time!

Great picture. I actually thought the fried green peppers with a sprinkle of powdered sugar sounded pretty good...though maybe not if I had a migraine with nausea...

Are you wearing a handknit sweater in the photo? Good for you for re-connecting with your homies!! I totally understand how it has to be so "intentional." Everybody is crazy busy these days!

Glad you had fun with your friend!