I swear, people are crazy. When I was a kid, we got a snow day about once every four years. And it's not because it didn't snow! I remember getting stuck in the school bus on hills, in driveways, in ditches. We were late sometimes, and sometimes we all got off the bus and went into the student's house whose driveway we were stuck in and their parents gave us all hot chocolate, but school wasn't canceled. If it was, you could bet there was a drift in the pasture twice as tall as I was.

It snowed last night, an inch or so, enough that Gator had to brush it off the windshield of the truck. So, of course, there was no school today in about four counties. It did snow all day, but by 8:00 a.m. it was melting faster than it was falling. I came home to less snow on the ground than there was yesterday. There's already talk of no school tomorrow. Who are these people?? I know, I've fully entered curmudgeondom and will soon be talking about how far I used to walk uphill both ways. But really!!!

Once again, I have snow of a different variety to show -- #2 of 99 Snowflakes. 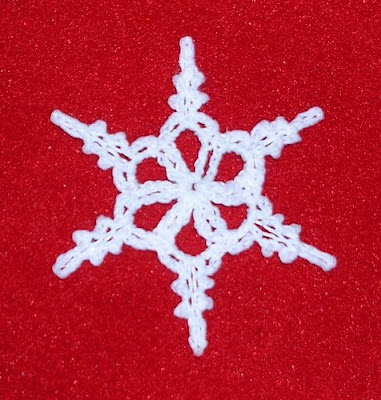 It's a little bit larger than the last one -- certainly larger than I thought it was going to be. I'm not even sure it qualifies as a mini-flake. It might be an actual grown-up.

I've been thinking about flakes a lot. I realized recently that my own design, the Fancy Star Snowflake was on the Snowflake Crochet-a-long at Crochetville last year. I liked designing it, but I totally winged it. I just picked up a hook and started. I'm very interested in sitting down and planning one out. I've been looking at pictures of real snowflakes for inspiration. I'm setting myself a goal and you are witness to it: I would like to design two more snowflakes this year and offer the patterns for free here and on Ravelry. I would also like to design one other thing, but I'm not sure what yet. I'll keep you posted.

I've actually got lots of things to show you, but I've been waiting because some of them hadn't been sent and received by their new owners yet. I'm still waiting just a bit but then I'll bore you with endless show and tell as is my wont. :D

In the meantime I'll update you on the cross stitch which I've spent quite a bit of time on this week. Again, I'm realizing how slow I am at this. 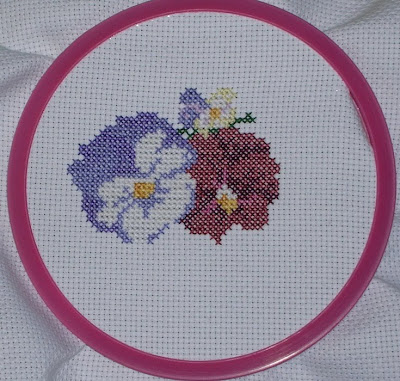 I like it, though. I just hope I can finish it without getting stressed. I hate for my hobby to stress me out. That's kind of the opposite of the point.

During the Super Bowl (Oh yeah! Geaux Saints!) I started Baktus. I'm gonna love this. Easy peasy knit, awesome and useful little scarf when you're done. And perfect for in front of the TV. 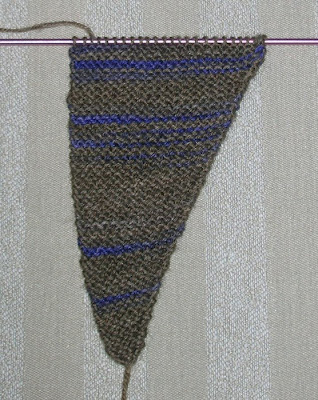 It's great for showing off fun sock yarns somewhere other than on your feet. If you're into that sort of thing. It appears that I am. Hmmm.
Posted by Sus at 6:24 PM

Pretty snowflake! We are supposed to get 10-16 inches of snow, but most of it later in the day. I don't know if they will cancel school around here, or not. Will have to wait and see and I suppose I should go to bed.

Pretty flowers! I've done some cross-stitch in my day, but not for a while. I was having trouble seeing to do it, but now I have bifocals and it probably wouldn't be as hard to see it now.