Can I make "sofa-full" a standard measure?

A long-held belief of mine has just been sent down the tubes. I was apparently one of many who thought that one had a year to send a wedding gift. According to Emily Post and Miss Manners, this is not so. Not that I ever thought it was an awesome idea to wait a year to send a gift, but I like to make beautiful things for people, and sometimes beautiful things take time. Often longer than the time from the receipt of the invitation until the event, anyway. So it turns out I've been an even crappier friend and relative in many instances than I thought. Oh joy. Having said that, I don't actually think that anyone has ever received a late handmade gift from me and thought, "Well, this would be awfully nice if only it weren't so freakin' late!" I do realize it's all just a bunch of nebulous guidelines for a bunch of folks just honestly trying to do their best. And so I soldier on. But I'd really been relying on that one-year thing. Ah well.

One of my very best friends got married a few months ago. Not only was I unable to attend, but I didn't get the gift done in time. It's still not done. But I've been trooping along on it and am at least on the downhill side now. It's a patchwork sampler afghan and because I'm only using yarn from the stash, it may be a little trippy. Which I think will suit the happy couple just fine. At least I certainly hope so. I have 3/4 of the squares done and am hoping the last 1/4 will go a little more quickly (oh, we always hope these things). I'd been feeling like I was just working and working on it and not getting anywhere, so laying the completed squares all out for a photo made me realize that I have actually accomplished quite a bit. Blogging can be therapeutic in so many ways!

So if my recent lack of handwork content has made you wonder what I've been up to, now you can see for yourself. One sofa-full of afghan squares, coming up! 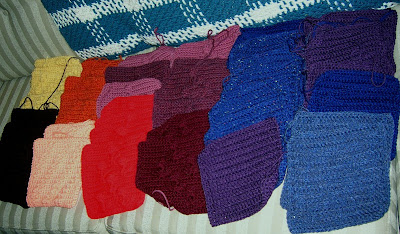 That's 47 squares and I have 16 to go. Then layout, seaming, and edging. But I may have to take a small break to make a Christmas stocking. Thank goodness I have a few more days off and streaming Netflix!

I shudder to think what other dearly held beliefs might be wrong...

Good for you! I think the seaming part would absolutely kill me, though.

Yes, I think "sofa-full" ought to be one of the ISO units of measure. A good part of the world (well, knitters anyway) would know exactly what that means, too. The blanket is going to be really nice; looking forward to seeing the finished product, even if I have to wait a year for it :-)