Hi! I'm having a snack and have decided that you would just love to know about it! Bloggers = narcissistic? Hecks, no!

So today was payday and that meant I partook of the glorious tradition of going to the grocery store after work. With Gator. This is an important aspect in that no two humans on the planet enable each other more than we do. Example: Gator was jonesing for some good cheese. Either of us shopping alone? One kind of cheese. Shopping together? We end up with five kinds. It goes on. But, while discussing the cheese options, I realized that what I wanted wasn't good cheese, but gooooooood cheese. You know, the kind I was raised on (Saturday afternoon snack!), which I haven't had for a long time and when I lived in Wisconsin they didn't even sell it. Like it was an affront to their cheesy ways. Yes, I'm talking about Price's Pimento Cheese Spread. That which tastes like no kind of cheese that exists outside of their little half pint tubs. That which has identifiable chunks of cheese-like substance suspended in a creamy cheese-like spready-stuff. With red bits I can only assume are meant to represent pimentos. Oh, they swear on their website that it's made with real cheese but, if it is, they disguise it well. In a good way. Needless to say I bought some.

While watching some Futurama, I busted it open, spread it on some saltines (the only way to eat it!), and reveled in the awesomeness. And missed my mama. 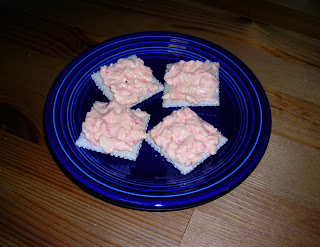 (Full disclosure -- I only spread it on the crackers so I could take a picture. The real way to eat it is to just dip the crackers right in the tub, but I figured you really didn't want a picture of that. Like you want this one.)

I imagine there are some wisconsinites who would easily eat that cheese... We're not that picky...of course probably because our cheese is generally accompanied by our beer...and after a couple of those, there is not much discretion... Glad to hear you are enjoying cheese outside of Wisconsin :-) Also, go Mizzou! (Did I say that right?)

Mmmm ,I love cheese, and I love pimento cheese--a LOT. I just haven't been able to find one that is egg free. I miss it...

LOL! I love your style girl! And I'm all for dipping. It's like ice cream - the only way to eat it is straight out of the tub. :-)