I love the phrase "Skeletal remains dancing on the sideboard"

I had planned to go back to work today, but after a very uncomfortable outing to church yesterday, I decided to take another day and have a slugfest. I mean, I really did nothing. I stared in the direction of the TV, but I couldn't tell you what I watched. I took a three hour nap. I surfed nothing in particular. Total slugfest. I hope I'm ready to rejoin the madness tomorrow.

Yesterday afternoon was only slightly more exciting. While sitting in my comfy craft chair, crocheting away, I heard a strange noise outside. I sounded like someone was shoveling snow, but of course there is none. It happened every few seconds until I finally went to the window and peeked through the blinds. Ah! Not a snow shovel at all! 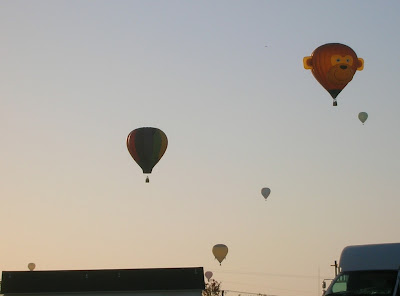 Six hot air balloons! The monkey one was close enough I could hear the burner as they made themselves go higher. It had been much closer to the ground when I looked out the window, but by the time I got my camera and shoes it had risen quite a bit. I could still hear it, though. We see balloons quite frequently, but six at once is fairly uncommon. So that was a nice surprise!

While I was outside with my camera, I decided to copy my blog buddy Becky in showing off my seasonal decorations. I lurve seasonal decorations. I've had my Halloween decs up since the weekend after Labor Day. On the day after Halloween, the Thanksgiving stuff will go up. And as soon as we get back from my sister's after Thanksgiving, well, you get the idea. Now, Becky has a couple of nice vignettes of decorations that look festive and photograph well, but mine are kind of scattered about. And I don't have a great deal, but I really dislike nekkid doors. I always say I'm going to make more holiday stuff, but the queue is long and it just kind of never happens. 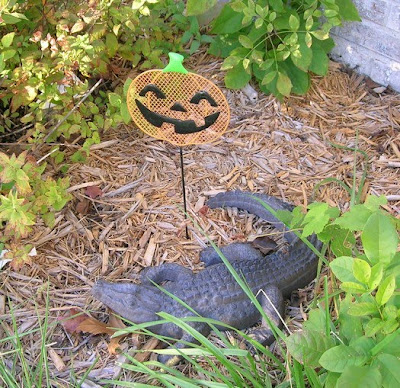 A maniacal Jack o' Lantern is nestled amongst the bushes next to a fierce alligator... 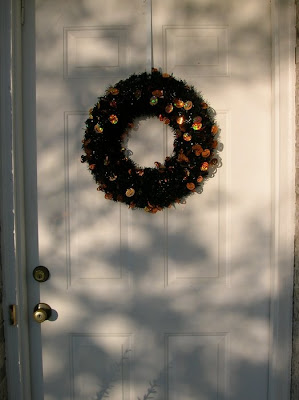 A creepy black wreath of foreboding festoons the front door... 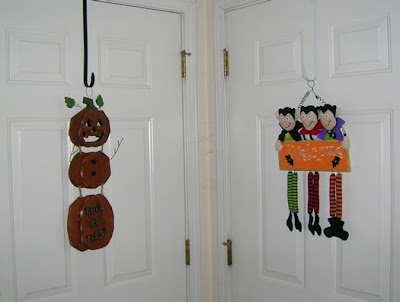 The inside of the front door as well as the door to the garage harbor representatives of the unnatural... 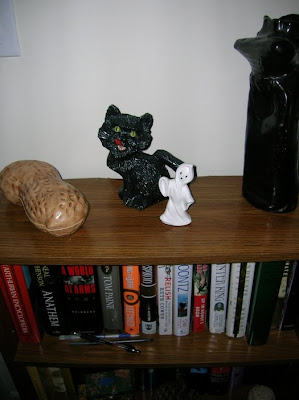 Bad luck and spooks abound on this bookshelf... 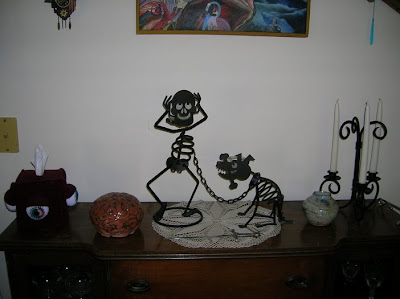 Skeletal remains dancing on the sideboard add a macabre punch to mealtimes...

Hee! Did I mention I lurve seasonal decorations?? Do you have some?? Show me! Show me! (I'm from Missouri, I can't stop saying that.)

Hey, thanks for the shout out! I love your decorations! Me, I went ahead and put out my Thanksgiving decorations WITH my Halloween decorations. I don't usually do that, but this year I did. I'll just take the Halloween specific ones down on Nov 1st, and will be ready for Thanksgiving.

Oh, and I forgot, that is too cool about the balloons! There is a town near here that has a big balloon festival every summer, but I always seem to be working that day.

Your decorations are really fun! And, your house is clean enough to notice them when you put them out. We're skating on a lot of clutter around here, so I just have one fall welcome sign on my front door and a pumpkin wood carving thing hanging next to the front door outside. Inside, I suppose I could just draw some ghosts in the dust...

I hope that you're feeling better. It's hard to build up stamina again after going through abdominal surgery... I don't know if a gall bladder is any different than a c-section (I mean, I *know* it is, but in terms of expectations for recovery...) but that kind of stuff can really take it out of ya...