Today is a lull in the stream of recent days of real or imagined meaning -- Friday was Friday the 13th, Saturday was Pi Day, yesterday was the Ides of March, and tomorrow will be St. Patrick's Day. But today, as far as I know, is nothing special. Except that it's the first day back from Spring Break at Marquette. Of course, as a grad student, I didn't have a break per se, just a break from TAing so I could do another big overnight experiment which I've just about recovered from. Boy, those just wear me out.

I haven't done a whole lot of knitting lately, but I did finish a fun project that I can't quite show you yet. I'm sending it off to Gator today, so in the next few days I'll be able to post about it. Since it's his Valentine's present, you get the idea of just how behind I am.

There has been some other knitting going on -- but I'm not overly excited about it at the moment. I've plugged away at the Breast Cancer Awareness scarf:

I've finished one half and finished the first chart of the second half. When the second half is done, the two halves get grafted together. It's a cool pattern, but it's going to have to be aggressively blocked when it's done. We'll see how this yummy yarn blocks up.

Yesterday, after I finished Gator's gift, I immediately cast on a new hat. It's just a basic watch cap, but will have some fun embellishments when it's done. I'll leave that as a surprise. 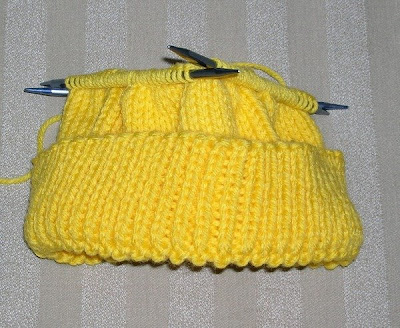 I'm still tired and preoccupied, so I'm not very witty or bloggie these days. Hopefully I will get my mojo back soon.

Email ThisBlogThis!Share to TwitterShare to FacebookShare to Pinterest
Labels: knitting

You are always working on the coolest projects ever. I hope you're able to catch up on some sleep. Perhaps our delightful weather today and tomorrow will give you a boost of energy :-)

What do you call an Irish guy who just sits in your back yard all day?

The scarf looks great! So does the hat. You're just going gang-busters! I'm still plodding along on, oh, two neglected projects. You go!

Those projects are looking great! I'm having a bit of a comments block, so sorry this isn't much.

A very late "Welcome back" from me! I've been away and then not had much time for internetting since I've been back. Plus I'm trying to limit my time online these days.