Yes, it's true, sometimes I can't even procrastinate efficiently. Remember waaaaaaay back in, oh yes, March, when I told you about the fun little game I played on Facebook wherein I made gifts for five people by the end of the year?? Yeah, that one! Well, the last gift was received earlier this week! In February! So, either "end of the year" meant December 31st and I failed miserably, OR, "end of the year" meant twelve months from the day I joined the meme, in which case I made it with weeks to spare. I'm just going to put the blinders firmly on and say it's the latter. Even though I'm pretty sure it was originally worded in such a way that I don't really get that out.

I already showed you Byron's java jacket, but I'm going to re-show so it's a complete set. And, you're a rather captive audience, hmmmm? Hehehe. I also made small modifications in the same pattern for gifts for Julie and I'm Still Calling Her "New Friend" Veronica. I love these so much. I can't believe I haven't made myself one yet. The little cable is my favorite. :) 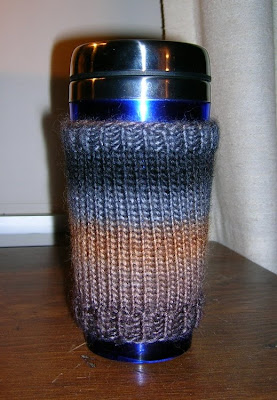 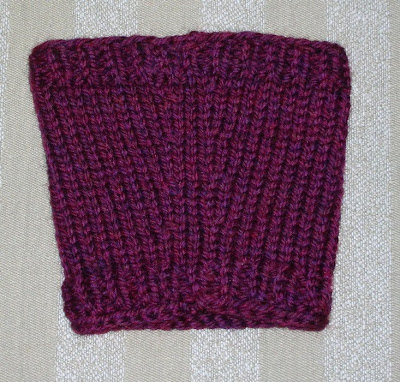 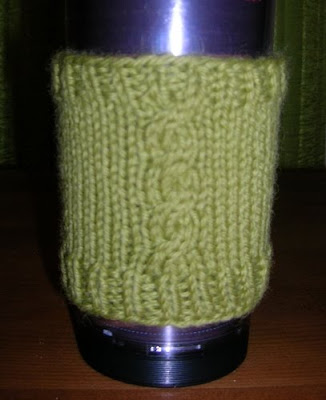 I also showed you the beginning of Don's gift, but it went through a bit of transformation after it's last cameo... Don's a cool guy and a bit nerdy (which is why I love him so). I remembered him talking about a certain graphic novel many years ago when it first came out. And when the movie version of that graphic novel came out last year, I hoped that a commemorative hat would do the trick! Turns out I was right! I'm so glad he likes it. :) 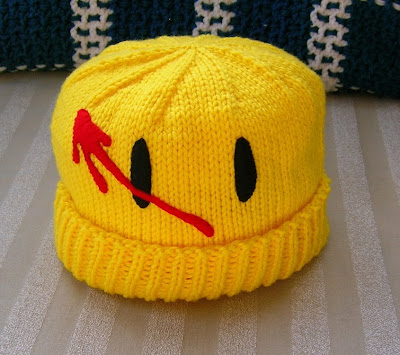 Speaking of nerd boys I love, Gator's best friend Wiggins was also on the list. Yes, we call lots of people by the last names around here. We're fun that way. Anyway, as a classic geek, I figured he could always use another place to stash some dice. And a dice bag shaped like a die was just too good to pass up. 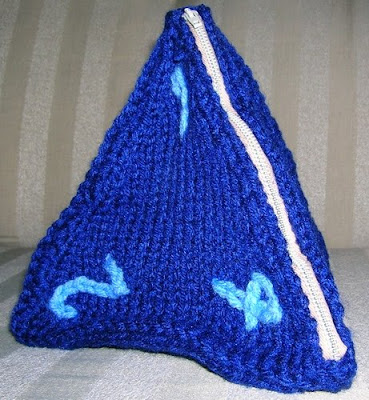 That's five! Whew! In the interest of full disclosure, it was the dice bag that did me in. I wanted to finish it before I started the last two gifts, but I was stymied. It was a little big fiddly to put together and get the numbers even. So I procrastinated it. I only finished it around New Year's. It turned out it wasn't so bad in the end. And I love the finished project. It was totally worth it, I think.

You make the most fun stuff EVER! Love the dice bag. I was expecting a cube (six sides), but it's really fun with four, and putting a zipper in it!! *THAT* would have caused me to procrastinate for another three months AT LEAST!

Fun to have found your blog!! Very cool stuff.

Such fun, cute projects! I know about procrastinating on scary things. My market bag sat around for a few months before I was brave enough to make the applied i-cord. Then I found it was easy-peasy! LOL! Was finished in not time, then!