We had a visitor!

My sinuses have been trying to crawl out of the front of my head all day (most of the time I actually feel pretty good, but you'd never know it if you only read this blog), so when I came home my plan was to heavily medicate and crawl into my bed. Before I could, Gator urgently bid me come out on the back patio and "see something". It's like nature knew I was feeling poorly and sent a tiny emissary to cheer me! 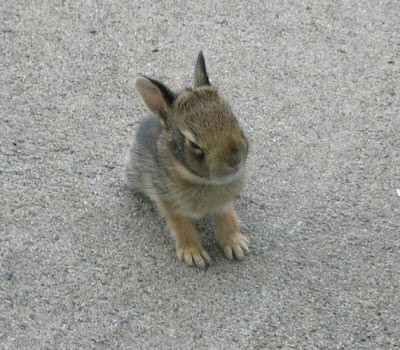 He was so small and unafraid -- he almost tried to hop right into the house as I was taking pictures of him. It's actually Gator's and my first encounter with a baby wild rabbit (which, in retrospect, strikes both of us as kind of odd). I looked it up on this innernets (so it must be true!) and since he no longer has a white blaze on his nose, he is old enough to have been kicked out of the nest by his mother, so we're going to try not to worry about him too much. He's pretty fast, but I also read the depressing statistic that 95% percent of all wild rabbits die before they are six months old. But we're not going to think about that.

Here's another photo of our sweet little friend, with Gator's feet for scale. So adorable and wee! 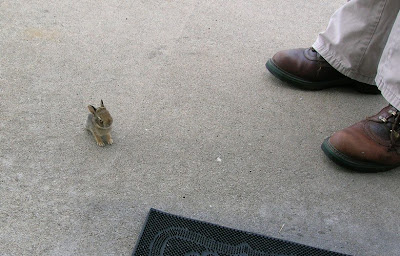 Live well, tiny visitor. Stop by whenever you'd like; you're most welcome here.

Oh how sweet! My first encounter with a wild baby rabbit was one that my dog had in his mouth. The bunny was frightened and squealing, but unharmed. The dog was a retriever and had a very gentle mouth.

So adorable and tiny! I can't stand it!

OMG! How adorable! And so, so tiny. I'll bet it made your day. We had an encounter like that a couple of years ago, remember? (http://sofar-sogood.blogspot.com/2008/06/thisclose.html)

Holy crow! That is the most adorable thing I've seen in FOREVER. So so so cute. IT's so great you were able to capture him in some photos. :) We just saw a baby rabbit in the wild last week, too. :)

You don't want to know what my dog did to a baby bunny about that size in 2009. Ugh. It didn't end well. This year, the baby bunnies managed to escape my dog, so they got to grow up. Phew. Your little bunny was soooo cute!