I hope you had a merry little Christmas! 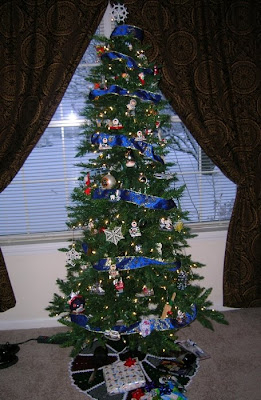 Christmas has been wonderful in our household -- mostly quite laid back, which I totally appreciate.  I didn't get everything done, but I got everything finished that had to be done.  Basically it's been one of those years where, if I'm in front of you on Christmas, then your stuff is done.  If not, we'll work it out.  I try to keep telling myself that there are twelve days of Christmas, after all.  Plus, I'll take presents to my side of the family on some nice weekend in the next month or so.  I do that so I have a good excuse to see them again soon. Not so I have some more time. I promise. ;)

The presents I completed before Christmas basically consist of two aprons for my MIL, who just moved into a new house and is decorating her new kitchen.  She requested aprons in red and black. 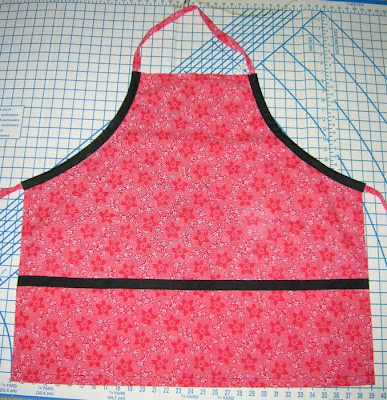 They're not fancy, but I tend to get into a real perfectionist groove that ends up making everything take a ridiculous amount of time. Also, I was totally winging it and I suppose a little more planning on the front end would have saved me some time. Oh well. I do like the finished product, though.

Here is where I would like to take a little of your time to rant and rave at a crafting corporate giant: Really, JoAnn Fabrics? I know you're all about low-paid, marginally-trained workers just sliding their shears down your little aluminum guides as fast as their little fingers can cut, but come on! That fabric was so off the grain when it was cut that I lost over a quarter of a yard squaring it up so I could use it! That's why the pocket is so shallow on the dark one. I paid for that quarter yard! Your policy is lazy and you suck. And you're not even that cheap anymore. The only thing you currently have going for you is convenient hours of operation, but I fear that will no longer save you. I live quite nicely without WalMart in my life; I can live without you, too. Remember that, JoAnn. Your days are numbered.

We had a lovely round of receiving, too. You can't see everything that's on display under the tree (does anyone else have this tradition, of putting the opened presents you receive under the tree to take the place of the wrapped ones you gave?) in this photo. Also, this year was heavy on the gift cards so it doesn't look that impressive (not that I'm complaining!). 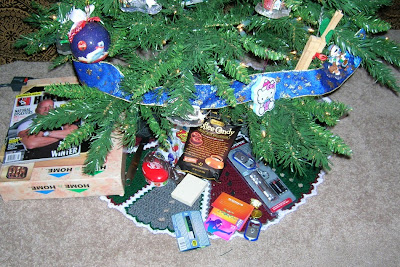 Gator's main gift was a total surprise and so fun to give. It isn't under the tree, though; it's charging in its station: 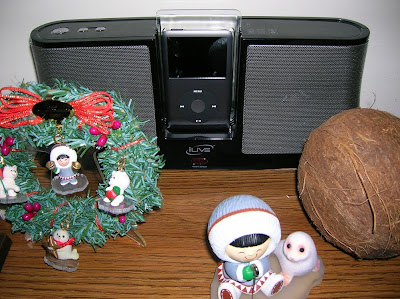 My main gift also isn't under the tree. Mainly because it won't fit. Hehe. 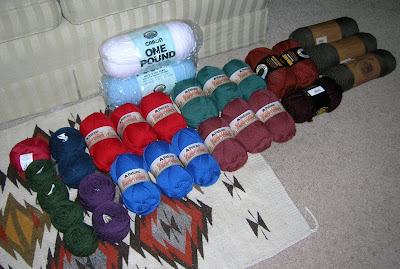 Thanks to a gift certificate to my LYS from my MIL, and Gator encouraging me to go wild at the Michaels yarn sale, I have so much handwork-y goodness in my future! Let's just break this down, shall we?
Whew! Quite an array, and enough to keep me busy for quite some time! Everything except the Classic Wool is earmarked for specific projects that I want to complete this year. We'll see how that goes. Remember the yarn storage room? How do we all think it got that way? But for right now, I'm super psyched.

I have another FO -- kind of my Christmas present to myself -- but I'll show you later after I get some decent photos. Yes, I'm delaying because of the photos, and not just so I have a ready-made topic for my next post. I promise. ;)

Cute aprons. Sorry you lost so much fabric, getting the material square enough to use. Grrrr.

Nice presents. I mostly got little stuff, except a new SATA DVD drive for the new computer I'm getting eventually. Hubby likes to build his own computers.

Nice stash of yarn. That must have been a good gift card!

Hope you had a Merry Christmas!

Your aprons look so great! And, very impressive design! I would have had to get a pattern...

We put our opened presents under the tree, too -- It was a tradition in my family when I was growing up, and now it's just a convenient place to put them before having to find their "real" home in another week or two... Nice yarn stash!

We always lined our presents up on the couch, so my dad could take pictures of everything we got. It's carried over into my adult life, too. Beautiful tree, BTW.