My file host was hacked. That's what started it all. I'd been storing my graphics and pattern PDFs on FileDen (which I'm not even going to link to) and then they all just disappeared. And when I went to login and figure out what was wrong, Google kind of freaked out and wouldn't even let me open the site because, they said, bad things were afoot.

So I researched a new file hosting service. A somewhat daunting task in the morass that is the innerwebs. Many hours later, I settled on Fileave and am pleased so far. But since I was uploading all this stuff again, I decided it was the perfect opportunity to freshen up the little sidebar headers and update my pattern PDFs (they still had my geocities site URL on them). And then, since I was doing all of this, I decided that the sidebar list of free patterns should have pictures of the items right there by the link because... Well, because they just should. And then, I thought, that's going to make the sidebar really long and cluttered and I should just have another sidebar. And then I realized that the last time I had hand-coded HTML from scratch was about 2000 and I'm not 100% sure about cascading style sheets and not 20% sure about XML. Which is what this template uses.

I almost just scrapped this design for something else entirely, but I like my little ladybugs and grassy things and my retro mod girl font! So I'm going to work with it. A little (read: a lot) of trial and error and I got me a third column. Of course, now the blog is wider than the header graphic, but as the title of this post suggests -- quite blatantly, even -- the evolution shall continue. But for now, it's good enough to upload and go with for awhile.

So that's what I've been up to.

Since the title of this post is also perfect for a little show-and-tell, I'm going to whip out some photos of WIPs I haven't shown you yet. I started these during my anniversary week of vacation back in January, and they've pretty much sat in this state ever since then. They'll get picked up again, but for now they're just happily hangin' out.

First up is the Mist Stole, which I think is quite delicious in this rich plum color. 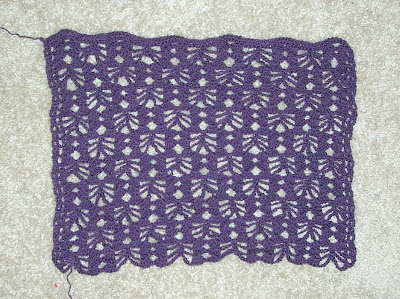 It's not going to look as super awesome as it truly is until after it's blocked. Which gets me thinking that I should totally invest in some blocking wires. Which, in turn, makes me think I should ask you all, my darling blog buddies, do you use blocking wires? Do you have opinions and preferences and anecdotes that you would share? I would be ever so grateful!

Next up is a WIP that is actually a WIP from waaaay back that I never told you about because... Well, because I kind of forgot about it. Hee! So, have you ever made a ton of granny squares because you thought you'd make this giant, elaborate all-tiny-granny-squares blanket, only then they stopped making the yarn you were using and you didn't have enough to finish, so you put all the squares in plastic bags and stuffed them in the bottom of your stash because you figured some day you'd either a) magically find more of the yarn that was no longer being produced, or b) just kinda figure something out? No? Just me then? Figures.

I've had over 150 of these little darlings crammed in the bottom of a Rubbermaid tote for about seven or eight years. My original plan was going to call for over 500 of them. I was using Red Heart Jeweltones, a kind of shimmery yarn, in a lovely jewel-y blue and a complimentary ombre. And matching that shimmer with another yarn was just not happening for me. During my last stash reorganization, I pulled them out and demanded myself to just do something with them. So I've taken the road of least resistance. I bought some Caron One Pound in light blue to make the rest of the squares and I'm joining them all with some Caron white using the flat braid join, which I'd totally forgotten that I lurve. Here it is so far: 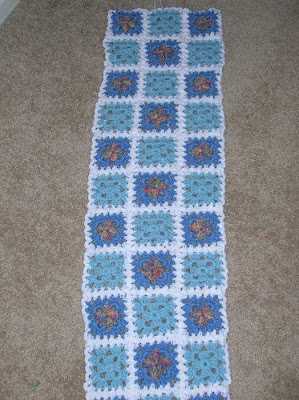 What you can't tell from the picture is that it's going to be big. Yeah, baby. This is no little throw. This is a man-sized blanket. In charming pastels. Hehe. And it's all mine, kids. Do you know that the last time I made an afghan to keep was before 1999? I think it's time. Of course, it may be 2012 before it's done, but that's something else entirely.

Blocking wires have been on my wish list for years, but I haven't gotten around to getting any. I need to order from Knitpicks anyway. Maybe I'll add them this time.

I have a similar afghan story. I think I'll use it for blog fodder tonight.

Crab salad...I used to make a delicious one back before I had to stop eating mayonnaise. If I can find the recipe, which I didn't really use anyway, I'll post it, too.

Thanks, Sus! I was wondering what to blog about this evening, and you've given me some wonderful ideas!

The mist stole looks really great. I have to look it up on Ravelry. I´ve bought some blocking wires recently on etsy but haven´t tried it until now. I´m a bit lazy concerning blocking, but plan to block my next shawl with the wires.

That granny squares look nice too. Can´t wait to see the finished blanket. You are quite ambitious these days!

The new layout of the blog is nice too. I´m glad you have stuck to your ladybugs. I would have missed them.

Sorry for your file problems. Why don't you just keep them on your computer vs an on line site?

Hope you get everything done you want, sounds tech wise way over my head.

Love the colors in your granny squares.

Thanks guys! Sounds like we'll all be trying out wires at about the same time! We can compare notes eventually!

Evelyn -- I seem to be mostly ambitious at starting things... Let's see how ambitious I am about finishing them! lol!

Sandy -- Thanks! Since I'm a cheapskate and use a free blogging service (like most of us, I think!), other than the in-post photos, which I can upload directly to Blogger, I have to store my site graphics and PDFs on a server somewhere so they can be downloaded when people visit the site. I use free file hosting services for that (again with the cheapskate thing). :)

I bought the blocking wires, from KnitPicks. Haven't taken them out of the box, though, so I can't tell you how great they work!

Hi there,
I really like the colours you are using for your afghan - I'm sure it will look stunning when it's finished.
I would also like to say "thanks" for all the lovely comments you have left on my blog - they are much appreciated.
Regards
Leslie

Oh I like the beginnings of this shawl...I keep wanting to make a shawl but never seem to get around to it.
And of course the weather is getting warmer and that will mean that I won't be motivated
.....I always have an excuse LOL

Love the afghan! Love granny squares and the color blue!