...program that lets you easily do the things to photos that I want to do. Granted, my kingdom ain't much. But dagnabbit, I only want to make shapes and write text on photos, then be able to move said shapes and text around on the photo and change their size, color, and location at my whim. Without the use of ridiculous things like layers. I don't think I ask too much. Really, I don't.

So, you ask, why all the photo manipulation angst? Silly, I suppose. All I wanted to do was post a little picture that depicts my progress on the George/Eleni afgan (my niece is having a wee one and, depending on gender, will be named George or Eleni) and I wanted to have the caption on the picture, rather than under the picture. 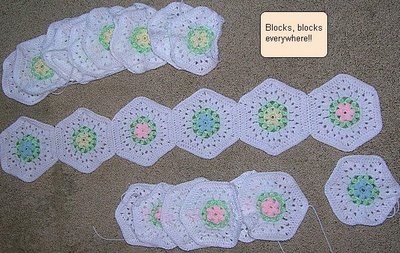 See, that's all I wanted to do. And it took over an hour. And now that it's posted, I'd like to go back and make the type a little larger, but I just don't have that kind of time, people.

I think its a right tasty blog.