Progress, that is. I know I've made it sound like I just haven't had a spare minute to crochet or knit. Now, c'mon. You knew that wasn't true. But it hasn't been anything terribly exciting.

I made another set of dishcloths for the awesome administrative assistant who helped me so much during my financial aid woes: 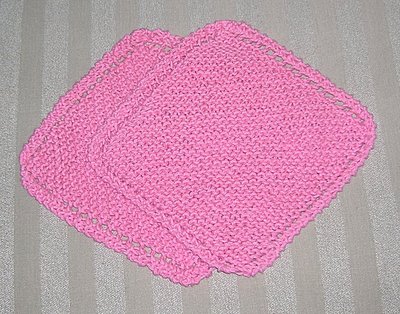 And I've been plugging merrily away on the Crazy Quilt Coverlet and I got to move the progress bar this week! (Get used to pictures of these squares. Get very, very used to it.)

So, I got a message on my voice mail from Missa, who went to her niece's wedding this weekend in Colorado. She was just wondering where I was going to get to watch the Broncos game, because she was going to be watching from Section X, Row Y, Seat Z!!!!! "Gadzooks," I thought, "what a little snot. Calling and rubbing it in my face like that." Then for most of the game, instead of being all nervous or bummed because we were, again, playing lousily, I was thinking, "Ha! Boy, bet you're glad you were there to see that!" (Don't worry, it's already been established I'm a horrible friend. She's the same way. We totally deserve each other.) But my boys actually pulled it off in overtime!!!! I almost couldn't believe it. So, I'll grudgingly admit that I'm glad you were there to see it, Missa.

Now, post-transcriptional gene silencing in Arabidopsis! I can feel your jealousy.
Posted by Sus at 5:39 PM

You've made a ton of progress! Love the squares...

At the risk of sounding like a total nerd, I'm dying to know where you got yarn in that particular shade of 1940s bottle green. I've always loved it, and it's really hard to find. Lately, as I've been using photoshop to retouch my Aunt Julia's old travel photos, I get really jazzed when I lighten an old, dark slide to find a headscarf or a handbag in that color. Juicy.

Tricia -- the yarn is the fairly ubiquitous Lion Brand Wool Ease in color 177 Loden. You should be able to find it at your local Michael's or JoAnn. Thinking of taking up handwork?? (If so, my evil plan is working! Bwahahahaha!)