The Artist as a young girl

In preparing to move, I have been sorting through just about everything I own in an effort to pare down, streamline, generally get rid of crap. During this process, I came across the Box Of Stuff From School That Mom Saved. In it I located one of my prized posessions -- the crowning glory of all my artistic endeavors. I peaked early, you see. The most impressive bit of creativity of my entire life, and it happened at age 3.

I started Jack & Jill Nursery School that fall. Under the direction of our wonderful teacher, Mrs. Riggs, we were instructed to produce drawings depicting the seasons. First that school year, of course, was autumn. I remember thinking (yes, I actually remember thinking about it) that this would be so easy. Fall was my favorite season (it still is)! It doesn't take a mature mind to quickly assess the merits of autumn -- the leaves change and fall and Halloween occurs. Great fun for kids, those things, and dear to my heart at that tender age. I selected my supplies carefully and created my masterpiece: 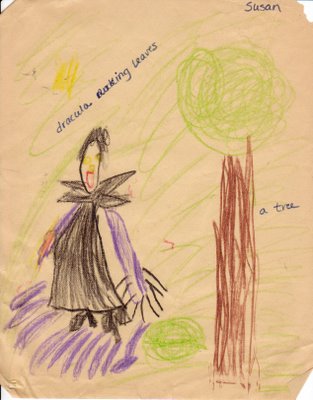 Yes, Dracula Raking Leaves. I had no earthly idea why the grown-ups seemed to be making such a fuss over my drawing and its content. My mother, who never did such things, went out of her way to tell all relatives and bridge club ladies what I had done. They all seemed so suprised that I had thought to draw such a thing. Really, it seemed like a complete no-brainer at the time (had that phrase existed then, which it didn't). Little did I know that I would never achieve such artistic accolades again.

That spring, we were directed to draw again, for the current season. For some reason, spring meant, in my (now)four-year-old mind, graduations. So I was determined to render a portrait of a graduate so realistic that the grown-ups would think it a photograph. Yes, I really thought that. I really aspired to such things. I was completely crushed and remember crying when I realized that the closest thing to flesh color in a box of 8 fat crayons (and not only were they fat, they were flat on one side. Does anyone else remember these???) was yellow. This was completely unacceptable and everyone would know it wasn't a photograph if my graduate had yellow skin. I was devastated. This development apparently caused me to lose some of my determination because the final product did not live up to my obvious artistic potential: 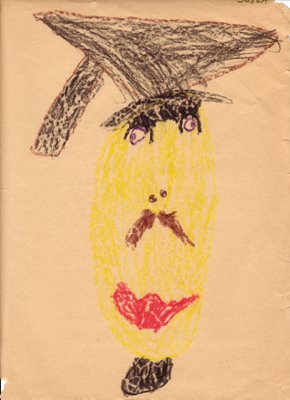 Now, don't get me wrong -- I knew it was good, I just knew that no one would ever think it was a photograph. I was so preoccupied with yellow skin that I apparently thought no one would notice the purple walleyed gaze. My hopes were dashed, I tell you. Dashed.

Wonder if I could crochet Dracula raking leaves??
Posted by Sus at 11:56 PM

Sweetie, Dracula raking leaves is only cute and clever when you do it at age 3, not ...the age you are now. Now it would just be kinda sad and pathetic~

Oh, ye of little knowledge of what can successfully be crocheted. Once you embrace the world of
amigurumi you will see that dracula raking leaves could be a creative masterpiece once again. Only it would have to be much, much cuter. Hellacuter.

"Dracula Raking Leaves" is an excellent album title. I'll throw it in the ring for the next Trouble In Mind release.

Looking at you avitar, I'm thinking "poop juice" would be an excellent name for a blog entry... LOL (Gator will be jealous that it's not his avitar!)
Sus

"But if you lash enough of them together, they make a pretty good raft."