So, hi, howya been? Cold enough for you? Yeah. Me too.

Here's some pretty things I made! Observe! Allow me to distract you with photos because my new camera cord came today!!

In August I moved away from the town that I love more than any town I've ever lived in. I left awesome friends that I adore. I came back to Missouri, which I don't adore. I got a new place with Gator, the love of my life, whom I adore more than anyone ever. Which is very, very good. I just fail to see why I can't have both Gator AND Milwaukee and will feel this way for ever and ever Amen.

So I left MKE in August and I didn't have time to make awesome going away presents for all my dear friends, most notably the Smart Girls (tm), because I was busy doing fanciful things like writing a thesis and having a lot of fun with said Smart Girls (tm). But I did make my thesis advisor a yummy silk and viscose scarf (zomg, that yarn is to DIE for!!!). 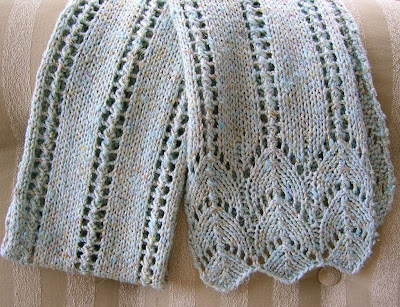 I also made a little something for my neighbor and friend Ron, who helped me out a lot and showed me a ton of great things in SE Wisconsin and was generally a great guy. He sails on tallships twice a year in different exotic locations like Spain, Fiji, Rio de Janeiro, etc. I know, must be rough, eh? So I made him this: 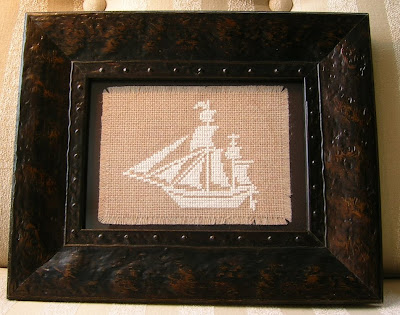 It's pretty darned straightforward stitching, but the frame was a total find (love you, Michael's!) and makes it look much more awesome.

So then I moved back to Columbia. Into a duplex. A duplex previously inhabited by three undergrad guys. That was not cleaned before we moved in. Or, most probably, before they had moved in. Or the people before them. After crying, screaming, calling the landlord, and going into what Gator calls Completely Polite But Completely Terrifying mode, we did get the landlord to deal with the inch of moldy slime in the bottom of the refrigerator. And the oven was "cleaned" (but it was much better).

So began the systematic scrubbing of the duplex. Honestly, I'm still not done. But there's only so long I can stay in that mode before I just have to start vegging out again. Oh, and we got a Wii, which totally cuts in to the cleaning time. And I started knitting and crocheting again after a brief hiatus.

My friend Tricia's SO Tommy really liked the bear I made for Gator last year. So I finally made one for Tommy, too. Here Tommy's orange bear sits beside his purple brother, Bearsly, who actually sleeps in our bed every night. Aren't they the cutest things? 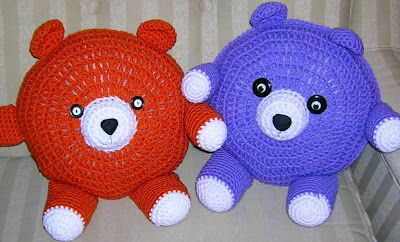 I only made one handcrafted Christmas gift this year, which is kind of weird, actually. My niece is a total Twilight fangirl, so I made her the scarf that Bella wears during the baseball game in the first movie. 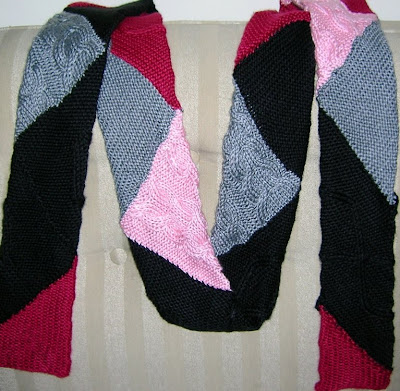 So that's a little of what I've been up to. Stay tuned for more and, before you know it, you'll be all caught up with me!

And they say all people who blog are Narcissistic. Pshaw.

Awww.... I'm sorry you miss Milwaukee so much; I'll always have a tender spot in my heart for it, too, though once in a while when there is some stupid political thing going on there, or they are talking about the homicide rate, I think it's okay to live a little bit farther away... Can't beat Lake Michigan and all of the ethnic stuff they have there, though... It's so cute that you refer to your Marquette group as the Smart Girls (tm).

I love that breast caner awareness scarf! Also, one of these days I'm going to learn how to crochet, though I need a new hobby right now like I need a hole in the head, but I might be able to count it as "new knitting skills." Have a great day!

I'm sorry you miss Milwaukee. I'm glad it's only about 45 minutes away from me for delicious shopping and restaurants and some time away from Sheboygan.

Looks like you've been busy! I love the mittens and both scarves. The little creatures are cute!

My blog hasn't been updated since December 9th, so I'm a bad blogger, too!