Who are you, again?

Howdy! I'll just get right to the angst.

I simply don't know who you are, anymore.

Ah, melodrama. But it's very true, in a way. I started this blog when I found out that I would be moving away from my husband for a matter of possibly years and I wanted to show him what I was up to in the big city known as Beer Town. I invited the world along, and we had a great time. I met new people and they seamlessly became part of the audience. I found out that other family members were relying on this blog as their main method of knowing what I was up to. Friends that were often featured in my posts from Milwaukee are now reading to keep up with me now that I'm back in College Town. But I've lost my main audience. Gator is here with me everyday and we share all the wonderful little daily things that make marriage awesome. So I don't have to show him what I'm up to via the innernets, I just turn around and say, "Hey, Honey!"

I have no intention of giving up the blog. But I just haven't figured out who I'm talking to, exactly. Crafting blog buddies are always supportive of my handwork show-and-tell and I figure they are interested in the minutiae of my crafts, because I'm interested in theirs. But I don't assume that my sister is all that enthused about snowflake after snowflake and pictures of my dinner when I go out with friends. Okay, I don't assume anyone is enthused with pictures of my dinner, but Gator always thought it was pretty cute when I did that and now he's only, like, six feet away from me, and I don't know what to say on here anymore.

This is going to be a process. And it's still going to be mostly show-and-tell, because that's what I do. I make things. And there's just no way a blog about me is not going to be heavy on the things I make. And until I figure out what else it's about, that may be about it. I don't blame anyone who gets bored. But I figure no one will get as bored as they would if they came by again and again and saw nothing but the Olympics post. And the Olympics were a long time ago, I know. I mean, Evan Lysacek is already halfway through Dancing With the Stars, fercryinoutloud.

Plus, putting the angst right out there makes it smaller, so they say. We'll just see how that works out, won't we?

So in the meantime, show-and-tell, it is!! I've been very busy throughout my blog silence, but as it is Monday, we shall, of course, focus of Snowflake Mondays!

It's certainly been snowing up in here, as evidenced by numbers 4 through 11 from 99 Snowflakes! 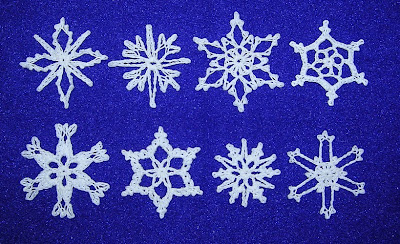 It's kind of odd to see flakes all lined up like that, I think. And some of these, I must admit, are not shining examples of flawless blocking. But I bet they're awfully lovely on someone's tree this winter, regardless.

But that's just a teaser -- an aperitif, if you will. Back in February, I stated that I wanted to design two snowflakes this year. Well, one down! It was super fun and I think I'll be doing more than just one more this year. It would be great if I found time to design one a month, but I'm not going to hold myself to that, especially once it gets really nice out and I'm out and about more than crafting. But I'm very happy to be back on the design end of things, even if it's something as small as a flake. Instead of winging it, like I did with the Fancy Star flake, I was guided by a photograph of an actual snowflake. I like the idea of that because I'm a little turned off sometimes by snowflake patterns that are really just small doilies and not reminiscent of any snowflake ever found in nature. Not that they aren't beautiful, but it's just not the road I want to take.

So, without further blathering on about crap you don't care about, I present:

Crystal Fantasy Snowflake
(available as a PDF file in the sidebar) 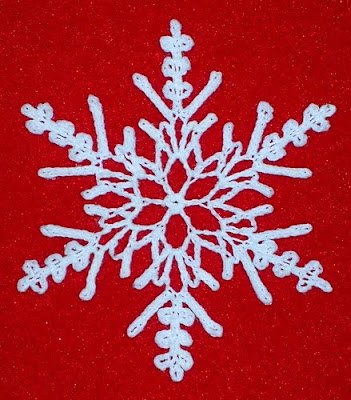 This design was inspired by one of the over 5,000 micrographs taken of
snowflakes by amateur photographer Wilson A. Bentley in the late 19th
century. He was the first person to photograph snowflakes and the results are
still stunning. 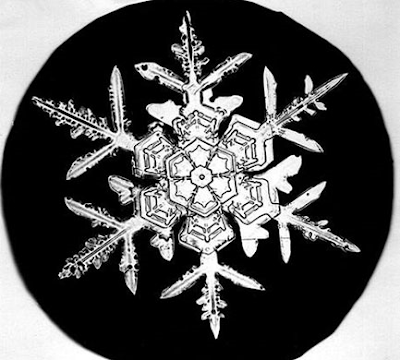 Photo by Wilson A. Bentley. Property of the public domain.

And there you have it. I like it much better than my first snowflake design, which I figure is how it should be. Happiness!

Super huge hugs, thanks, and kudos to my awesome blog buddy Judy who beta tested this pattern and made me sound more competent than I am. You totally rock, girl!!

Next time I'll tell you about the non-snowflake related things I've been doing! Won't that be fun?

Show-and-tell is always fine by me. But it's great to have a brand-new shiny snowflake pattern to play with (and a relief not to see that Olympics post!).

Well, I always read your blog posts, and am never bored by them whatever the content. (As I read through your narrative, I started to get concerned that you were going to abandon the blog, though I'm so glad that you're not!)

Your snowflake is totally awesome, and I love it that you are modeling your own patterns after photographs of real snowflakes! It's going to make a great book, just sayin'

Wow, that is one gorgeous snowflake. You are quite the designer. For what it's worth, I love your blog, and miss you when you aren't around.

Wow, great snowflake reproduction! LOL! I would have no clue how to design the pattern or crochet it, because I'm not much of a crocheter.