It's happened! It's happened! I finished all my gifty Works In Progress (except for the one that was a dismal failure and I gave up and frogged -- No, Sis, not that one!) and I've been being selfish!!!

Goal #3 of the new year well under way! (For the record, goal #2 is probably going fine, as well, but I won't bore you with the "Today, I did some sit-ups" post.)

That means that I have two new WIPs to show you! And I know you can't wait, because they are ridiculous. Yes, they're cast on and thus qualify as WIPs, but, well, have a look for yourself: 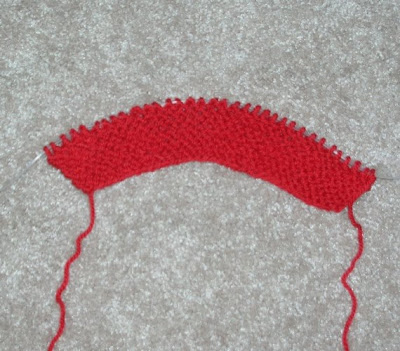 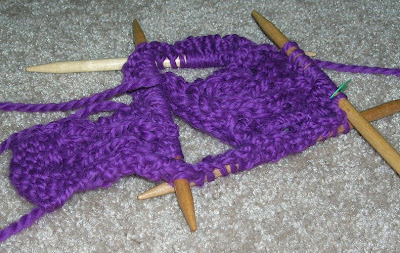 Yeah. I know. There's not much to show. The red up top is going to be the Woolly Bully bag and below is the beginning of a Snowboarder Hat That Rocks! Yes, those are purple earflaps you see there. And, yes, since it's purple, it must be for Gator. :)

I know I mentioned a project I finished, but that makes it a Finished Object and no longer a WIP, and tomorrow is Friday, and since I botched the alliterative WIP Wednesday, the least I can do is go for an FO Friday! Hee.
_____
Posted by Sus at 8:09 PM

Those are some pretty fun patterns! YAY for moving into the "selfish knitting" phase of your program. It totally *IS* your turn to get something nice off of your needles to keep for yourself!

Great patterns! I've just put them in my Ravelry queue.

Both nice pattern and I love that hat. It´s going to be great in purple!

OH, that snowboarder hat really rocks! I have got to make that! Then I need to find some heads to wear all these hats I'm knitting.

Thanks guys! I've had my eye on both of these patterns for quite a while. So good to get them underway!