Well, I may be, but Gator's foot definitely is. Broken, that is. It's caused him to become housebound and me to discover what a crappy nursemaid I am. Not that I don't want to be a good nursemaid, mind you, but I just don't think it's in me. I think it's the same thing that makes me not yearn for children. Gator says I'm not nurturing. Not as an insult, just as an observation. He's right. He seems okay with it, but it does bother me a little bit.

So, do I sound like a complete bitch, or what? I think sometimes I must be, but Gator says no. He lies a lot sometimes, though. I suppose I'll go with it anyway. 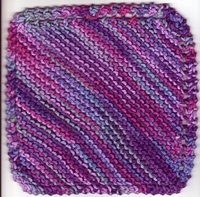 New Topic: Since I'm quitting my job at the end of this month, I'm trying to make something for everyone I work with. Since making something cool is not really allowable in my timetable, I'm making them knitted dishcloth/facecloths. This is mostly because I already had a bunch made up and they're quick and easy and I don't have to look at my hands while I make them so I can make them while watching movies, etc. I hope they like them.

Old Topic with New Topic Tie-in: I just realized that I just announced that I'm going out of my way to make things for people I've know for just over a year. Right after I'd gone on and on about how I am trying to avoid doing more things for my temporarily crippled husband. I'm a bad, bad girl. Why does anyone like me?

This too shall pass. I know I'm harder on myself than anyone else ever has been or will be (except my sister, Jane, but that's another story).
Posted by Sus at 7:39 PM