Woe is me (feel free to jump directly to the picture)

So I am home sick today with a head full of cotton wool soaked in vinegar (or at least that's what it felt like this morning), and that seems like a perfect opportunity to go on at length about how my aging body is betraying me and how that is affecting my life including, most importantly, my handwork. Now that I've slept like the dead for the better part of the day, that is.

About eight months ago, my right elbow started hurting. Soon, I couldn't even straighten my arm without intense pain. I went to the doctor who determined that I had lateral epidondylitis (tennis elbow) that was actually due to a (probably very old) rotator cuff problem. Physical therapy for my shoulder was prescribed and a cortisone shot in my elbow so I could stand to do the exercises. Theory being that once I strengthened the shoulder, the elbow would resolve itself.

I'd never had a cortisone shot before so I didn't know what to expect. It worked like a dream and after two days my elbow was completely pain-free. I breezed through physical therapy and everything was peachy. Then I opened a bucket.

To be fair to myself, it was a weird bucket. Five gallons with a sealed lid that could only be removed if you cut several spots around the top with a pair of snips. I apparently didn't snip sufficiently because when I went to pull the lid off, I felt what seemed like a separation in my elbow and intense pain. It swelled up but I iced it and by the next day it was a little better. Since this happened at work, I went to work injury where they assured me I had just strained a muscle, put me on restrictions for a week and the pain slowly lessened to nothing. Two weeks later I had a completely clean bill of arm-related health.

Then the cortisone wore off.

Since then I've been trying not to go back to the doctor, but I've been in constant pain. I do not just want another cortisone shot and another round of PT. I'm a Smart Girl (tm), so I've been researching some of my problems on my own. I've learned that my pecs were very shortened and I've been stretching them which really does seem to affect my elbow. I am sore in every trigger point of my right latissmus dorsi, but I've so far been unable to find a lasting way to relieve this. And, let me tell you, the effects of this muscle are far-reaching. My teres major is pretty pissed off. And my triceps are none too happy. I read, I stretch, I exercise, and sometimes it seems to help. But it just doesn't last. I'm not quite ready to give up, but that day may come. But if their response is another shot and another round of PT, that copay will be the last of my money they'll see.

The reason I tell you all of this: It's really cut into my handwork. It often hurts to crochet or knit. So I'm not getting much done. Which particularly sucks because I have this big project I'm working on for an extremely dear friend who got married last Saturday and I'm not even half done. Now I realize that Miss Post says I have one year to present the happy couple with their gift, and it's not that I've never utilized this convenient rule of etiquette in the past, but I really should have been able to get this done. And that just makes me sad.

So that's my story -- things are pretty slow around here. But while the cortisone was still chugging away, so was I. I showed some in progress pictures earlier in the process, but I failed to show the finished product -- an imminently pretty cross stitch for my mother-in-law. And I got it done in plenty of time for Mother's Day, complete with mat and frame. 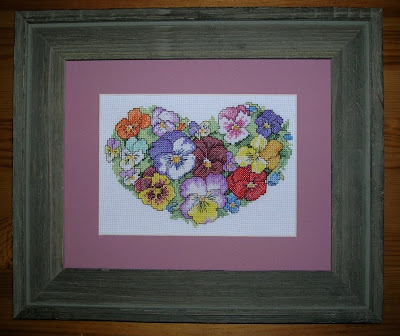 Click to embiggen
It's not high art, and it's not a show of immense skill, but I think it is just very, very pretty. It was a kit that I luckily stumbled upon in a clearance bin, and it was hilariously called a "Weekender". This is about like the redonculously named "Square-A-Day" tablecloth that I've ranted about before and remains the bane of my handworking existence. Seriously, who are these people??

So now I continue to plod along on the big wedding project when the arm doesn't stand in the way. But at least it's not titled something that constantly makes me feel like a slow, inadequate crafter with too much of a life. I'm free to impose all of that upon myself.
Posted by Sus at 2:18 PM

The cross stitch is very pretty. I'm so sorry about your arm. I hope you find answers and can be pain free very soon.

I wish I knew what to tell you to get your arm all better... I hope you get relief from your pain soon! After seeing a couple of "frozen shoulders" this past week, I am humbled by the amount of dysfunction our own bodies can invoke on us...and imaging can only get us so far -- it's so hard to explain pain and figure out how to fix something when everything looks like it should in the pictures... Anyway, really, I hope your elbow heals quickly!

Near constant, debilitating pain + intense desire, nay need, to craft = MISERY! Poor thing. Sounds like what you're doing is helping - can't hurt - but do take it very easy on the elbow. Are you supporting that arm when you stitch? Ideally you should support both arms (muscle balance) - those horseshoe-shaped nursing pillows come highly recommended.

And the cross stitch is very pretty - love all the colours. But, unless someone has the luxury of stitching from dawn to dusk with no interruptions (oh lord, that sounds divine!), no way is that a weekender.

Thanks, guys! I'm still battling, but I have good days (or good parts of days, anyway.) As long as there's steady improvement, I'll consider it good.

Beautiful cross-stitch! I would love that, too! Sorry your arm is giving you so much trouble! I hope it's not still bothering you so much, since this was posted a while ago.