A week ago, I went with the women I worked with to a restaurant in a town 45 minutes away (I'm from the midwest; I measure distance in time. Deal.). Since we live in a town known (for its size) for its variety of epigastric delights, you may think it odd that we would traverse such wilderness (read: nothingness) to a tiny town in the middle of nowhere for supper. Well, it went like this:

The radio station we listen to every day (every. single. day.) has a contest each morning. They play a movie clip, then a potion of a song that has been sped up. It's sometimes surreal to hear the Cure sound like Alvin & the Chipmunks, but that's neither here nor there. Being the pop culture mavens that we are, we can often nail the movie clip or at least come up with a good educated guess. The songs are much easier as they are usually from the extremely heavy rotation we are bombarded with every hour of every day (every. single. day.). The prizes for this contest vary from gift certificates to a local record store (yes, I said record store. I will never consider a "CD store" an actual thing) to coupons for McDonalds coffee (but it's good now! All gourmet-y and everything! Really! This is not a bullshit prize! If we say this often enough maybe you'll even believe us! Or something!) For several months in a row, the prize consisted of gift certificates to a restaurant in Fayette which is home to a small college and not much else. We were bummed. Why would we try to win a meal at an out-of-the-way place like that, especially when it might suck and not even be very good?

Well, my co-worker Miss A. had a great idea. Let's try to win a whole bunch of gift certificates, then we can all go together and have cheap supper and if it sucks or is not even very good we will still have a good time because there will be beer! So, we screwed on our thinking caps, then realized that these would do no good because this was a radio contest. So, we screwed on our hanging-out-watching-videos caps and we totally scored seven sets of gift certificates in no time. I even won once and I wasn't even in the room! It was that easy!

Last Thursday, the time came to reap our rewards. We piled into two vehicles and started on the curvy, hilly way to The Restaurant In The Middle Of Nowhere.

It was a cute place, and friendly, and we had many appetizers and libations. The entres were enormous -- we felt we needed to give names to some the the pieces of meat we were served, they were that big. We were loud and probably annoying, and if I thought any of the poor people we tortured with stories of the histology lab were reading this, I'd apologize. But we were very cute, and tipped well, and made cute boys take our picture. And really, what more can people want from us? 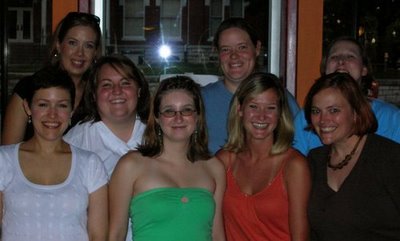 In case you were wondering, the food at Emmet's Kitchen and Tap was exceptional and the prices were reasonable (even without the gc's). And there was, in fact, beer. It's too bad it's so far away or I would go there more often. Oh wait, I'm leaving the state. Well, I'll probably never go there again. Good thing that cute boy was there to snap the souvenir photo.
Posted by Sus at 9:35 AM

I'm just SURE that all of the staff and patrons ABSOLUTELY LOVED all of you. What a sweet lookin' group of folks. (can you see the sarcasm dripping from my words?)

I imagine the only way they would have loved us more is if you had been along, too, my sweet. ;p

See? Instead of sitting in my hotel room with my Taco Bell and my high speed internet, I could have been hanging out with you... and possibly some of your super cute friends.

Leave it to Scuzzy to name a piece of meat.