Why isn't that the official drink of Irish Fest?

This is an actual exchange I had with a new acquaintance:

"I'm going down to Irish Fest today."
"Cool! Are you Irish?"

This just struck me as the stupidest thing someone could ask me. Not because I'm a fiery-haired lass with more freckles than white and was wearing a "Kiss Me, I'm Irish" shirt, because I am not and was not (my fire comes from a bottle -- I think it's fairly obvious). It struck me as incredibly stupid because, well, let's consider this parallel exchange:

You see my problem.

Irish Fest is a big deal here -- in fact I believe it's the largest such fest in the country. Everyone goes to Irish Fest. This was why, even though I was loathe to spend the money, I went -- I knew if I didn't I would regret it because people talk about it a lot. So I went. It was fun!

On the way to the park, I discovered something amazing. People actually buy these things and use them! In public and everything! With excellent attention to spacing! And, with helmets!!

Once inside the park, the first thing I watched was a bunch of big (supposedly) Irish lads pullin' at each other with a big rope. I don't know which team won, because the rules to tug-of-war are apparently far more involved these days than they were at Camp Robinson. 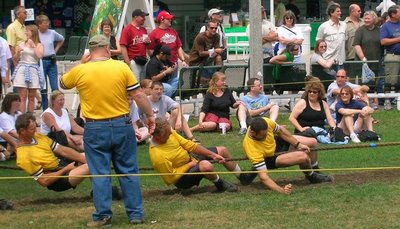 I wanted to experience a traditional Irish lunch, but considering I hate corned beef and cabbage and beef stew, I settled for a generic British Isles-y alternative: 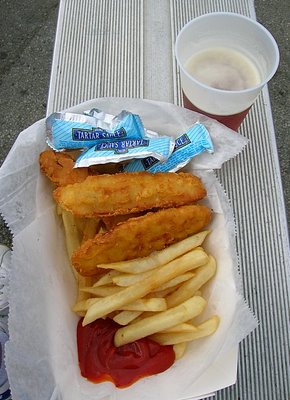 I'm really picky about my Irish music, but once I find what I like, I can barely contain myself. I was totally jammin' in my seat to Baal Tinne! You can download three of their songs for free here. I know it looks like they're just sitting sedately on the stage, but they were rockin'! 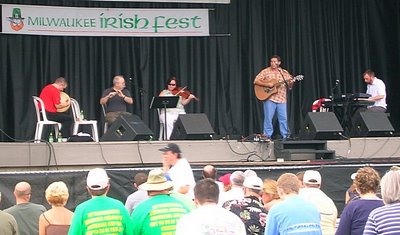 There were bands and dancers and readings everywhere you turned, food was bountiful if expensive, and the goods for sale were more varied than I'd expected. There was also a large display about genealogical DNA testing which I was, of course, very interested in but disappointed with. I'd like to see what kind of research there is that they didn't present.

Anyway, then there was a parade! 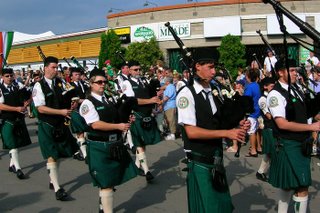 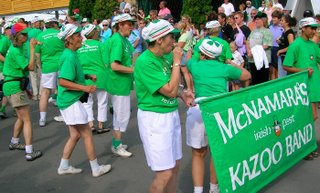 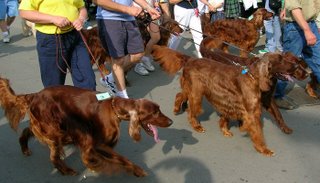 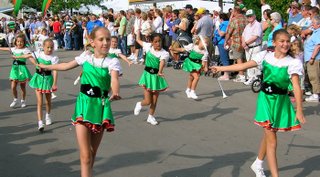 I had only one complaint the entire day. Now, anyone who knows me, knows that there is one thing I must aquire at any festival, fair, or otherwise that has food vendors: Funnel cake. I must have it. It doesn't even matter if I'm hungry or not, I must have me some funnel cake. THERE WERE NO FUNNEL CAKES AT IRISH FEST. None. And, kids, I looked. Now, I know funnel cakes are not traditional Irish fare. Nor are giant stuffed soft pretzels, and there were certainly enough of those. So I ate a cinnamon scone and pretended to be happy about it.

But, really, aside from that small disappointment, I had a lovely time at Irish Fest. Then I walked home (yes, before it got dark, dear) and started a new picasso potholder for someone very dear to me who had donated some of the thread to me and I promised I'd make her something with it in return. 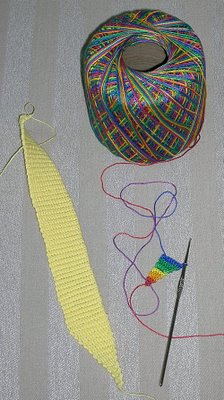 I had a wonderfully full day! I feel like I'm really getting my money's worth with this city-livin' thing. I'm diggin' it.

Tomorrow I'm going to Marquette for orientation. And no, I'm not a French explorer. So don't ask.
Posted by Sus at 12:27 PM

Looks like loads of fun...but that whole segway thing, I really don't get. I mean, if it's too far to walk, don't you just ride a bike? Much cheaper, more energy efficient, etc. If you are disabled or something, and can't walk that far, or ride a bike, you can't stand up on that stupid looking thing anyway--that's what Rascal Scooters are for. So, at some point in the future during your time in Beer City, you must, must, must talk to one of these people and get the skinny on the whole deal. Are they geeks with too much money, or what? My mind will be winding around this one for a while.

I have a feeling those Segway folks were part of a tour. I've seen them in Washington and San Fran. I would think they'd just get beat up.

I've never been to an Irish Fest and I actually am Irish. Sheesh.

Sus(an)
Great 'fest pics and the parade. I also went to the linked paged and went though the pics of you in the "Stand By Your Man" musical.... since I didn't get to see the real deal. Fun stuff! Be lookin' for more goodies.
Dad-in-Law