I say that I knit. To non-knitters, this is absolutely true. Well, actually, it's absolutely true, regardless, but to other knitters, I must specify that I knit. As in, I don't so much purl. I can, but I hate it. And I pretty much suck at it. At any time, without my undivided attention, like if there's a song I like on the radio or it's time for Will Shorts on Sunday Edition or if there's a particularly pleasant breeze or ANYTHING, any purl I attempt might suddenly, unexpectedly, become a knit stitch. So, in classic Sus style, if I am not good at something, I tend to avoid it. This means that garter stitch and circular needles rule my knitting life. Usually, my knit projects are garter stitch dishcloths. Granted, they are the bomb, if uninteresting. My family, for example, would freak out if I started making funky cool dishcloths in lieu of the basic, Grandma Black garter-stitch dishcloth (pattern below!). So, that's what I do.

But, within the aforementioned constraints, I've branched out! Sassy! I've begun knitting the thing that Gator has been trying to get me to knit for him for years. He calls it a toque, but the pattern calls it a fatigue cap. It's one of those closed tubes that can be used as a scarf or one end can be punched up into the other end and it becomes a hat. Much like your seat cushion becomes a flotation device! (If that's the case, why can't the plane just become a boat??) 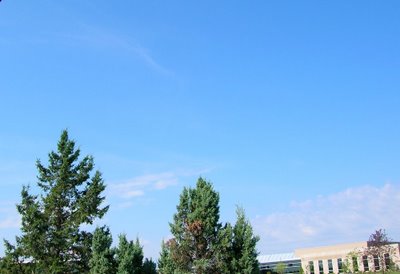 This time, with trees!
*****BACK TO YOUR REGULARLY SCHEDULED BLOG*****

This is the first hat I've ever knit, and it utilizes those things that have been in my knitting bag for years but I have always maintained a healthy fear of -- yes, that's right, double pointed needles. Eek! Scary! I already tend to spend four years per project picking stitches up and putting them back on my needles, with dp's there would be dropped stitches everywhere! There! In the bushes! Under the couch! Ack, what's that poking me in the butt? A dropped stitch! Yikes!

But, in the spirit of the fatigue cap, I decided to bravely soldier on (Har! I'm so funny!). I actually swatched for this project (which I notoriously don't even consider doing, ever), and selected the proper size of dp's. I corageously cast on and, holding my tongue just right, started knitting. And you know what? Crazy Aunt Purl is right -- it's like extreme knitting! It's so fun! And it's so impressive to non-knitters! And it makes me feel like a real knitter, even though I know it's a complete sham!

I've only just begun (...to live, white lace and prom- Ahem. Excuse me.), but I think it actually working out for me. Obeserve (click for larger image with actual stitches represented!): 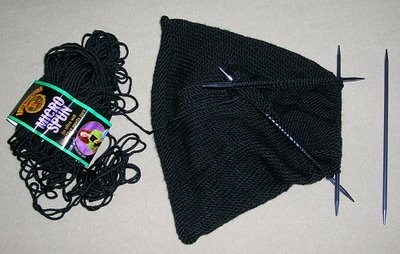 Now, don't do something crazy like expect an FO pic any time soon. Instead, there will be sorting! packing! moving! waiting for an internet connection to be installed in the digs-I-haven't-seen-yet! silly things like school! But we'll visit it every so often and maybe even make a flip-book so you can actually see the toque grow! Wild!

And now, my first publicly posted pattern. Ooooh. I found this pattern written in my dear Grandma's own handwriting in her knitting bag after she passed away. I've modified it slightly and now present it to you so that you too can make your family members completely dependant upon you for their kitchen cleaning needs. 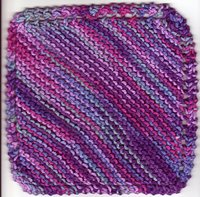 5. repeat row 4 until there are 40 stitches on the needles if you are using a solid color, 38 stitches if you are using variegated yarn. This is because the solid skeins are 2.5 oz and the variegated are only 2.0 oz. If you don't care if you make two that match from the same skein, make it as big as you want!

7. repeat row 6 until there are 4 stitches left.

Voila! The best dishcloth in the world! You're a superstar! Make them while watching football games and awards shows! Now you're just like me! Sassy! Scary! Sascary!
Posted by Sus at 9:25 AM