Okay, in respect to my last post, I'm officially asserting that Snowflakes Don't Count. I joined the Snowflake Monday webring (whose Ringers are very good about adding ring code thankyouverymuch) last week, and I have some flakes for show and tell.

Actually, I'll admit, I totally cheated. I had recently found a ziplock bag full of a dozen or so snowflakes that I made a couple of years ago, but couldn't find until I moved (and this had been driving me crazy). None had been stiffened and blocked. So my goal is to stiffen several a day until they are done, then start making a new one every week. And, yes, still make significant progress on my WIP's.

I discovered (too late, unfortunately) that I had a bad pin in my bunch and it left some rust on the first two flakes. Rest assured that said bad seed has been plucked from the lot and should cause me no further angst. I'm thinking just a dab of white acrylic paint might do the job. Anyone had luck with this? 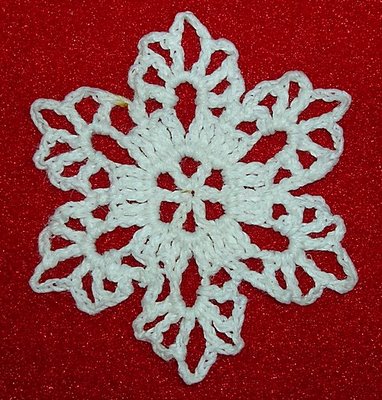 The Pretty! potty makes a great backdrop for flake photography. 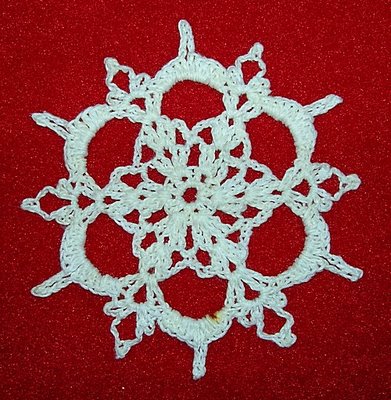 And one more in it's voodoo stage. 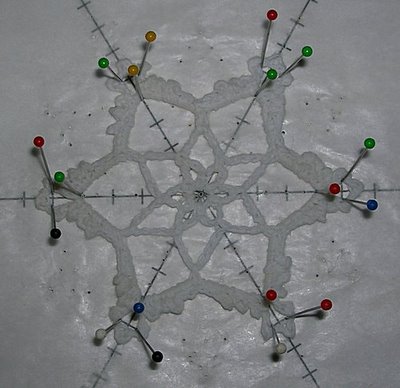 Somewhere a snowflake is screaming for mercy.
Posted by Sus at 8:02 AM

ooooh, what nice cool pictures to look at in the heat of August in MO. Actually, it's not nearly as hot as it has been, but the snowflakes are lovely just the same. Nothing flaky about them.